Plant a tree in memory of Cecilia
An environmentally-friendly option 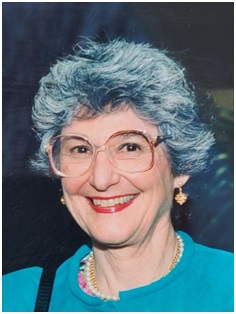 Cecilia Bartlett Distad grew up at 2572 Stratford Road in Cleveland Heights with her twin sister Betsy, younger brother Edward Totterson II, mother Florence Creech Bartlett and father Edward Totterson Bartlett.  Edward took the Rapid Transit downtown to work at The Cleveland Trust Co. On occasion he would ride along to the bank with Harris Creech, the bank president. Prior to World War II Cecilia and her siblings spent their summers on a small family farm in Kirtland Ohio, that Harris owned, including their dog Happy Birthday and Cecilia’s horse Silver. Being an identical twin brought with it both mischief fooling teachers as to who was who and later fooling their evening dates and occasional media attention.  Cecilia and Aunt Betsy were once photographed posing with identical pant suits for the grand opening of the LaPlace shopping mall.   More than once her son’s Neall and William, (Bill) would grab the wrong skirt when reaching out for moms’ protection.

Cecilia loved to travel. She often spoke of her own mother spending a year in Florence Italy as a young woman and of the friends she made when her family toured Europe after she finished high school.  Cecilia graduated from Laurel School and then a 2-year college on Washington D.C.  Cecilia met Richard C. Distad MD in 1955 in Cleveland. Richard was a resident at University Hospitals.  In 1958 Cecilia and Richard were married.  Then they were assigned to Ladd A.F.B. in Fairbanks Alaska for 2 years and Dick became the airbase pediatrician.  The family grew quickly with the arrival of Richard Neall in 1959 and the addition of Barry their Alaskan malamute dog.  With a new puppy and baby and winter temperatures as low as -50F the years in Fairbanks were busy including trips with friends north to the Brooks Range.

After completing the military assignment, the family returned to Cleveland. In 1961 the family grew with the arrival of William Edward (Bill).  Cecilia helped as office manager for Dick’s beginning medical practice.  Cecilia served on The Women’s Advisory Council of the Western Reserve Historical Society (W.H.R.S.).  She and Richard were interested in Colonial American Decorative Arts and were among the founders of The American Furniture Collectors (AFC) group in Cleveland.  The AFC supported W.H.R.S. and purchased acquisitions proposed by WHRS curators for the Ohio decorative arts collection. For the U.S. 1776 bicentennial, the group started an Antiques Show bringing prominent art and antique dealers to Cleveland.

Mom was active.  She loved sports with field hockey at Laurel School then years of tennis, paddle tennis and sledding or skating when the winter was cooperative. Early vacations were with extended family at Edward Bartlett’s camp on Belgrade Lakes Maine.  Later, with family visited friends who were scattered across the US on summer trips crossing the states to the Southwest and California.

In the 1980’s Cecilia and Dick rented a beach house on Nauset Beach, Orleans, Cape Cod MA bringing Neall and Bill’s families together with grandchildren.

A beloved wife, mother, grand and great grandmother, Cecilia will be missed.  A private interment will be held at a family plot at Lake View Cemetery on Monday April 19th, 2021.

Plant a tree in memory of Cecilia by clicking here.
To send flowers to Cecilia's family, please visit our floral store.

Plant a tree in memory of Cecilia
An environmentally-friendly option

Plant a tree in memory of Cecilia

5 trees planted in memory of Cecilia

We send our deepest condolences to you and your family, Dick. Cecilia was one of the lovliest neighbors we have ever had and we miss her.
Mary Lou Jameson and family

A Memorial Tree was ordered in memory of Cecilia Bartlett Distad by Mary Lou Jameson and family.  Plant a Tree

Anne and I just learned of your loss of wonderful Cecilia. We join in expressing our sadness over the loss of an exceptionally fine individual: gentle, kind, always interested in others, and an all-around graceful empathetic soul.

So sorry to learn of your loss.. Fond memories of Community Drive
Stay safe
Marilyn Bedol

My deepest sympathies to to Dick and their family.  My late wife Jane and I knew Cecilia through American Furniture Collectors and WRHS.  We shared many dinners with them at AFC and WRHS meetings.  We also shared a common connection with The Cleveland Trust Company, where my late Father-in-law worked for 46 years.

Our Sincere Sympathy to your family. Cecelia and Dick were our favorites of Mom and Dad’s friends. Interesting, fun and caring. I can still hear Cecelia’s beautiful laugh. The A & H Briggs Family
Betsy Briggs Nogueira

A Memorial Tree was ordered in memory of Cecilia Bartlett Distad by Betsy Briggs Nogueira .  Plant a Tree

Plant a tree in memory of Cecilia