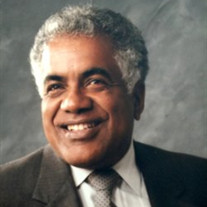 Winston Henry Richie was born in Jersey City, New Jersey, and spent his entire life in the Cleveland area.  The middle child of dentist and pharmacist William Frederick Richie of Waxahachie, Texas, and former teacher Celeste Strode Richie of Holly Springs, Mississippi. Winston Richie grew up in Cleveland, where his parents permanently settled on East 99th Street in the so-called "Gold Coast" neighborhood. The Richie's were active participants of Cleveland's Black community and they introduced Winston and his older brother William, Jr. and younger sister Janet Celeste to a life of civic and political activism.
He attended Cleveland Public Schools, and obtained degrees from Adelbert College and Dental School at Western Reserve University, now Case Western.  He played basketball and football for Glenville High School, and basketball for Reserve at a time when the local laws in the segregated south required that he stay in separate housing from his teammates.  During these college years he formed a band, "Regents of Rhythm," and played the saxophone.
In 1953, Winston Richie married Beatrice Jourdain with whom he had four children: Winston, Jr. (Charlotte), Beth (Cathy Cohen), Laurel and Anne (Louis). He was blessed with seven grandchildren - Leigh, Kara, Louis, Lauren, Alexander, Camille and Ella.  Dr. Richie is survived by his sister Janet and his brother-in-law Doug.
Dr. Richie ran his dental practice at 55th and Woodland and then at Chagrin and Lee, for more than three decades.  He is considered by many to be the catalyst for integration in the city of Shaker Heights, serving several terms on the city council as its first Black Council Member and President. In a memo to his colleagues, Dr. Richie recalled the absence of African Americans in city government, when he was first elected to the Council in 1971: "There were no Negroes - we hadn't become Black or African American yet - in white collar jobs at City Hall or in any of the departments, no Black police or firemen; and I don't believe there were any Blacks on City Committees - none to be found anywhere except in custodial or laboring positions in the Service Department." He co-chaired the East Suburban Council for Open Communities, a non-profit, which participated in a public-private partnership aimed at promoting racial integration in Cleveland's suburbs.  He continued his passion for integration by becoming a real estate broker for Realty One and later Howard Hanna.
Through his leadership on the Council and in a variety of housing, civil rights and public service organizations (Plan of Action for Tomorrow's Housing, the NAACP, Ludlow Community Association, Thornton Park Committee, Council on Human Relations & Fair Housing, Alpha Phi Alpha Fraternity and the Boule), and as a faithful member of Fairmount Presbyterian Church, he helped increase diversity in city government and improve the quality of life in his community and beyond.
He approached his civic work with fearless intentionality; he was quoted in the New York Times as saying, "Only if some of us put ourselves in awkward situations until we feel comfortable will any of this change."
During his 90 years in Cleveland, he traversed the globe far and wide:  by land in a motor home with family to the Grand Canyon; by car with friends across unfamiliar terrain from Paris to Barcelona; by ferry to Martha's Vineyard and Nantucket; and by air to Germany, Australia, New Zealand, Africa, the Caribbean, Mexico and South America - and on the Concorde to England with his grandchildren.
A devoted fan of the Cavs and the Browns, he supported local teams as a season ticket holder.  He loved problem solving, puzzles and games - Skittles, Backgammon, Numbers Spoons - and took after his father as a master bridge player, ultimately teaching bridge at Tri-C.  For years, he was a familiar presence on the tennis court, his matches often accompanied by friendly woofin' and signifying!  Blessed with a decent singing voice, he would easily regale visitors with favorite jazz and R&B songs, and initiate family sing-alongs of "A Hole in the Bucket" and "Old King Cole."  At Links holiday parties he delighted all with his larger-than life portrayal of Santa Clause.
Above all, Dr. Richie was a great family man.  His children and grandchildren were his "pride and joy." Five months ago, he celebrated his 90th birthday with family in a quiet Cleveland park, just blocks from his childhood home.  Friends and family will forever recall his many words of wisdom.  Among his favorite gems were: "Things work out best for those who make the best out of the way things work out," "Do a good, get a good," "He who wants by the yard and tries by the inch should be kicked by the foot," and "He who knows not and knows not that he knows not, teach him."
Winston was frequently recognized around the city by former patients, clients, club members, schoolmates and friends.  He inspired many affectionate nicknames, including "Doc" and "Win".
In his later years, Winston Richie lived with Parkinson's, a disease he said he "had no respect for because the pills are so small!"  He approached his illness as he approached his life - with grace, curiosity, courage, faith and humor . . . and more humor.  Even as his health failed, his love of humanity remained, as he often teased his caregivers while showing great interest in their daily lives.
Winston Henry Richie leaves behind an adoring family with many memories of happy times together, a more integrated and inclusive Shaker Heights, and a large and lasting legacy of community and political activism.
Winston H. Richie, 90, retired dentist, Shaker Heights Councilman and Vice Mayor, passed away on Friday.  Services scheduled for Saturday, February 20 at 1pm in Fairmount Presbyterian Church, 2757 Fairmount Blvd., Cleveland Hts.   In lieu of flowers, donations welcome in Dr. Richie's name to Goodrich-Gannett Neighborhood Center, 1400 East 55th Street, Cleveland, OH 44103.