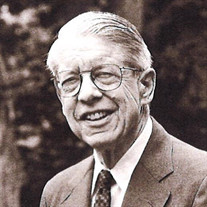 William McKinley Osborne, Jr., 87, died September 30, 2016 at home in Pepper Pike following a brief illness. Born June 4, 1929, Bill was the youngest child and only son of William and Jessie Osborne of Cleveland Heights. Following graduation from University School, Yale and Harvard Business School, he married the former Amelia Scull of Dover, Delaware, who he met on a blind date on a trip from Yale to Wheaton College, and began work at the Youghiogheny & Ohio Coal Company in Cleveland. At Y&O, which was founded by his grandfather and became a major coal and natural resource company, Bill worked alongside his father, uncles and cousins, eventually succeeding his father as Chairman and CEO. After the sale of Y&O to what is now the largest natural gas pipeline system in North America, Bill continued his business career, establishing North Coast Industries, Inc. with partner Donald Esarove, and served on many corporate and charitable boards.

For the past fifteen years, with the help of devoted caregivers including Surina and Ivory Stokes, he has cared for Amelia at home as she has suffered from Alzheimer's disease. Favorite local institutions about which he cared deeply and in many cases served as trustee included the Cleveland Museum of Natural History, the Cleveland Orchestra, the Cleveland Museum of Art, Holden Arboretum, and Lake View Cemetery. He was a lifetime trustee of University School and was honored with its Graduate Award in 2004. He was a Cleveland Browns season ticket holder since 1955, and a loyal attendee of monthly Y&O retiree gatherings in the coal fields of southeastern Ohio.

Preceded in death by his parents and sisters Annette Tuttle and Dorothy McAdoo, he is survived by his wife of 63 years Amelia; their three sons William III, Silas and Samuel (Michele); his sisters Marjorie Davidson of Columbus and Virginia Charman of Chagrin Falls; grandchildren Amelia Osborne Scott, William IV and Charles (New York), Jesse and Lily (Chicago), and Peter and Carl (Seattle); and numerous Osborne, Bruch and Mills cousins.

Following a private burial at Lake View Cemetery, a memorial and reception will be held at 11:30 a.m. on Saturday, October 8, 2016 at the Upper Campus of University School at 2785 S.O.M. Center Road, Hunting Valley, OH. In lieu of flowers, the family encourages donations in Bill's honor to Holden Arboretum in Kirtland, OH and the Cleveland Museum of Natural History.
To order memorial trees or send flowers to the family in memory of William Osborne, please visit our flower store.