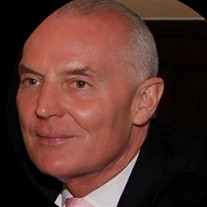 William was born on April 3, 1948, in Youngstown, Ohio. He attended Choate School in Wallingford, Connecticut, and graduated from the Ohio State University. After college, William moved to Los Angeles, California, where for many years he enjoyed a successful career in retail management. He and his family returned to northeastern Ohio in the late 1980's. He joined his brother in the running of Smythe Cramer Co., one of the largest residential real estate companies in the country, and served as President.

William and his wife, Sarah, met as children, and shared many memories of working at the G.M.McKelvey Co. during summer breaks, and socializing at the Youngstown Country Club and porch parties at William's parents' home. He was a robust athlete all of his life, and excelled at tennis, skiing, open-water swimming, and in later years, daily fitness exercise. He was a sophisticated and experienced world traveler, and along with his wife, enjoyed many trips abroad. He had a playful sense of humor, a refined sense of style and taste, and a commitment to the loving support of his family.

He is the son of William Brownlee McKelvey and Sallie Turner Mckelvey. Along with his wife, he is survived by his three childrena�"William Brownlee, Lucia VanFleet Cochran, and Benjamin Brownleea�"and two grandchildren, Elle Bentlie and Colte Christenson. He is also survived by six siblingsa�"Letitia, Lucius, Walter, George, Sally and Anne, and many nieces and nephews. A beloved brother, David, died several years ago.

There will be a private service for William in Youngstown.
To order memorial trees or send flowers to the family in memory of William McKelvey, please visit our flower store.