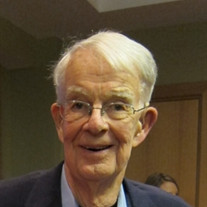 Bill Jones passed away peacefully with loved ones by his side on Friday, Jan. 16, just 4 days shy of his 93rd birthday, after a short struggle with pneumonia. He was blessed to have spent the recent holidays with his extended family in Cleveland.

Bill's life accomplishments could fill a book, but his strength was in the personal connections he made. He was devoted to his wife Betty Wampler Jones of 62 years who predeceased him in 2006. For the past three years he has been engaged to Jane Hinman, the current love of his life. They have been constant companions and she has been welcomed into the family with open arms. They adored each other and brought joy and excitement to each other's lives. Bill's grace was that he could love Jane without losing his deep connection to Betty.

He was the son of Jean Macfarlane Jones and William Telford Jones, whose family histories Bill delighted in researching in his last years. Bill was the proud and loving father of four daughters, all of whom follow in his footsteps working to make the world a better place: Berry Jones Mensing (and Andy Mensing) of Boston; Bambi Jones (and Tracy Moskovitz) of Whitefield, ME; Bobbi Jones Johnson (and Tom Clune) of Nosara, Costa Rica; Becky Jones (and Macci Schmidt) of Northampton, MA. He was the best grandfather to Blake Mensing (and Anna Carstens Mensing), George Mensing (and Katie Linke), Andy Mensing, and Allison Mensing Corbett (and James Corbett). He was the brother of the late Barbara Jones Zander and Uncle Billy to her four children (Brooke, Brad, Charlotte, and Harry) and their families, most of whom were with him over the holidays.

Bill graduated from Dartmouth College and Harvard Business School, with honors and awards from both. He was proud of both alma maters and kept in close contact with classmates. He was a lifelong learner with an insatiable curiosity. Through much of his adult life, almost every evening found him out at a lecture or cultural event. It was hard to keep up with him. He sought to improve the educational system in Cleveland and donated his time and energy to many area educational institutions.

He served as a Lieutenant in the Navy in the South Pacific in World War II as a weather forecaster. He made lifelong friends and remembered the kindnesses of the local people on New Caledonia, some of whom he met again on a return trip in the 1990s.

Bill's business and community accomplishments are far too many to list in detail, but here are some highlights:

a�� He was a Vice President of TRW from 1948-1963 and was President and CEO of Cleveland Machine Controls for over 30 years, from 1963-1996. Dynamotors, Inc. was his latest post retirement business passion. Implementing one of his several patents, he was focused on perfecting a new high tech motor design that greatly reduced energy use. The United States Department of Energy recognized DMI's achievement with financial support and an award for the innovative technology.
a�� He served on the board of directors or was a trustee of such organizations as Invacare, Even-Cut Abrasive, Greater Cleveland Growth Association, Paterson Leitch and was founder and first chairman of the Council of Smaller Enterprises, an organization which helped small enterprises and in which he took great pride.
a�� He was advisor to or on the board of many local educational institutions, including Case, Cleveland State, Hiram College, Cleveland Center for Economic Education, Myers University (formerly Dyke College), and Junior Achievement National.
a�� His walls are covered with business and civic awards, including awards for his visionary leadership, his skills as an entrepreneur, and for lifetime achievements.
a�� He held several patents and was always thinking of new inventions, searching for people who would implement his ideas. He wanted to make the world a better and a smarter place in which to live.
a�� He was a civic and cultural leader and belonged to many clubs, often serving in leadership roles. He was active in the non-profit world; community service was part of his life's mission.

He learned to love theater from his wife Betty, and they were active supporters of the Cleveland Play House through their attendance of plays and financial support. He took on many leadership roles on their board. Modeled after a play reading group his parents had run, Betty and Bill started a play readers group which is still active more than 60 years later. Bill hosted his last play two months ago, which brought him great delight. He was the master of creating props.

His creative mind served him all his years and inspired others. As an early entrepreneur, he saw that his mom had canned some jams and decided he could make a profit, loaded up his wagon and sold them to neighbors for a dime each. He celebrated his friends by writing playful poetry for their birthdays and anniversaries. He had murals painted on the walls of his home to bring the much-loved waterfalls and ocean inside. He was always looking for easier and better ways to do things, thinking up new business ideas and products until the end.

His front hall closet contains a map of the world with pins marking all the locations to which he travelled with family and friends. He loved adventure and opening up the world to his family. One of his last life missions was to scan his thousands of slides so that he could enjoy his travels at his computer. Bill had recently been chronicling his life in short stories; his capacity for remembering details was truly amazing.

He had many lifelong friends, all of whom will miss him or have welcomed him on on the other side as he starts that new adventure. While many, many of his friends died over the years, Bill still has friends ranging from age five to 105. He was always a sociable man, drawing others into his sphere of attention and influence.

Four years ago Bill moved from his home in Hunting Valley to South Franklin Circle retirement community. The family extends their thanks for the patience and generosity of the SFC community and staff and for responding positively to so many of Bill's suggestions which seemed to have no end.

So much more could be said to describe Bill; he was a multi-dimensional man. He was curious to the end, asking probing questions and inquiring into the thoughts and lives of those with whom he engaged. He loved a good argument and never thought less of the person with whom he disagreed. His mind was sharp; he was as engineer and problem solver. But he was also patient and caring, and he loved a good joke. He felt worrying was a waste of valuable time and energy. He never looked back and had few regrets in his life.

Life was good to him and he lived it to the fullest. He often quoted Wilbur Wright, "You'll never know if you can fly unless you try." He approached business and life in general as a challenge, always pushing others to be their best. He set a high standard for himself and expected and inspired great things from those who were part of his life. Life was something to engage with and dive into. We easily imagine him in heaven posing a whole new set of questions to those around him.

Bill was not afraid to die, likening the experience to boarding a plane for an unknown destination, eager for the next adventure. Although prepared for death, he was busy and productive up to the end. During these last months, as he felt the end of his life nearing, there was an urgency to complete all that he had in the works. He was dictating to the end. He will be sorely missed but his presence will be felt for a long time to come.

PDF Printable Version
To order memorial trees or send flowers to the family in memory of William Jones, please visit our flower store.