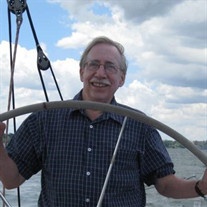 Bill was born in Evansville, IL, but soon moved to Wooster, OH where he spent his early years in the town where his parents had met. The family later moved to Bay Village, OH and then Shaker Hts. After he graduated from University School in 1961 he attended Cornell, earning a BA in mathematics. He continued his education at University of Wisconsin, Madison where he received a PhD in computer science with a focus on artificial intelligence. His dissertation was about an interactive teaching technique for programming languages.

Bill took a job at Rutgers University, Cook College where he was head of the admissions committee and helped shape the nature of the student body. He chose this over other opportunities because the emphasis at Cook College was on teaching. While there he was one of the users of the ARPANET, a precursor to the Internet. At times he was the only person using the now ubiquitous tool.

In 1978 he moved back to the Cleveland area to take a job with Chi corporation, a software company that served local enterprises. Throughout the 1970s and 1980s Bill was an editor for professional journals. He taught as an adjunct at three schools, including Case Western Reserve University. He next took his skills to Sohio, now BP, so he would have more time with his children during their developmental years. In the mid 1990s he was co-founder and then sole proprietor of the Scheduling Niche, a computer programming and consulting business. In 2002 Bill took a position with OSIsoft, an international company that makes software for industrial clients, and was employed there at the time of his death.

Bill traveled widely for business and pleasure. He had been to all fifty states and many countries including Mexico, Turkey, Korea, China, Chile, the Philippines, Singapore, Brazil and most of Europe. During the 1960s and 70s he crisscrossed the United States in a small Volvo, driving it long after the odometer broke at a quarter million miles. When the car broke down in the middle of the great plains, with no help for many miles, he took bits of things from the trunk to fashion a temporary repair and continued on his way.

Whether at home or traveling, wherever he was, Bill immersed himself in the local ambiance and history. On the way back from Britain in 1972 he scheduled a layover in Iceland so he could watch part of the Fischer-Spassky chess match in person. The following year he went to Washington D.C. to witness some of the Watergate hearings. His trip to China enabled him to visit the birthplace of his mother and the university where his grandfather taught. There was a large clock on Tiananmen Square counting down to the handover of Hong Kong, which happened during his visit. A few years ago in Alabama he walked each morning to the Edmund Pettus bridge, stopping there before returning to his hotel. He shared a recent trip to Australia, New Zealand and the Great Barrier Reef with his son Philip. Bill was planning trips to Africa and Antarctica with members of his family.

When not working, Bill shared his passion for baseball with his family, especially his sons Curtis and Philip. He was a voracious reader who liked crossword puzzles, classical music, classic rock, sitting in his family's woods in PA and visiting his vacation spot in Canada. Bill was a life-long learner, and a life-long teacher. He believed that anything worth knowing was worth sharing. He served as a mentor for many of his colleagues and cared deeply about them.

Bill Fabens was a kind, understated gentleman with a wry sense of humor, a ready smile and good intentions toward all. He was confident in his own identity and in return accepted others as he found them. Everything that he did in life he did for his family, which to Bill included his friends and colleagues. He exhibited this in ways large and small. In the 1970s, to show his love for Priscilla, he programmed a calculator so that he could tell her exactly when and where to look for the moon rise each evening. Bill had a heart and sensibility from another era but melded that perfectly with an understanding of current technology, science and society. His modest brand of love and caring will be missed by all who knew him.

In lieu of flowers, please make a donation to the food bank of your choice. Memorial Services will be held at Church of the Saviour, 2537 Lee Rd., Cleveland Hts., OH 44118 on Saturday, March 4, 2017 at 3 PM. Reception to follow in Calvary Hall.