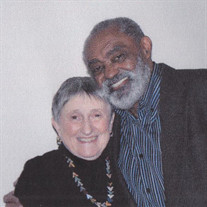 William Avery "Avery", age 82 of South Euclid, OH; beloved husband of Molly Holland (Cairnes) and the late Jeanette (Ellison); loving father of Blanche Avery; dear stepfather of Mary Jo Gary (James), Joseph Francis and Molly Cairnes; dear grandfather of Nigel, Cyrus, Desmond, Jay, Xavier, Zenzele, and Whittaker Pelligree and Edward and Grace Gary.
Avery was born in his parents, William and Blanche Avery's restaurant on December 9th, 1934 in Roanoke, VA because the African American hospital was full, and they could not go to the white hospital. He was an only child, who grew up under Jim Crow laws in a segregated town that prevented his parents from voting until the FDR administration. His father worked for the railroad, and it was the best job an African American could get at the time. Growing up in Roanoke, Avery had to ride in the back of the bus, tennis was segregated in parks, and he was the first African American to participate in the Roanoke Soapbox Derby. At the time, African Americans could not try on clothes in stores, so his father made his clothes. Avery went to Harrison Elementary School, which had all black teachers, then went on the Lucy Addison High School and had few white teachers. In high school, Avery played baseball, football and tennis, which was "his thing". He was even invited to try out for the Pittsburg Pirates Minor League Baseball team, but his father said no because he wanted him to go to college. After high school, Avery attended West Virginia State College, where he received a Bachelor of Music and a Masters in Social Work, and Cleveland State University, where he received a Masters in Public Administration. First, Avery worked as a music teacher for the Sutphen School of Music of the Phyllis Wheatley Association. After this he moved on to Social Work for the Cuyahoga County Welfare Department, where he was a member of the Committee to Organize Employees when he became the first Chief Union Steward of the Department. Avery then became the first African American superintendent of the Blossom Hill School for Girls, an institution for delinquent girls. He was also the first African American Coordinator of Institutions, and the first African American Associate Director. Avery was then appointed by the Governor of Ohio as the first African American to serve as Regional Administrator of Ohio Department of Youth Services for Cuyahoga and Lorain Counties. During his full time employment, he taught art time at Cuyahoga Community College and Cleveland State University, where he taught social studies courses. He retied from state government in 1992, and returned to work in 1998 as Director of Probation Department, Cuyahoga Court of Common Pleas, , Juvenile Division, from which he retired in 2001. In April of 2003, he received the Frederick Douglas Award from the Cleveland Club of the National Association of Negro Business and Professional Women's Clubs for his efforts made to enhance equality. Avery was the member of many organizations, he was a Cleveland Clinic Children's Hospital for Rehab trustee, was the president of the Ohio Coalition for Better Youth Services, a American Indian Education Center Trustee, a Cleveland International program chairperson, the president of the Global Issues Resource Center. Avery also founded Racial Harmony with his wife, Jeanette, wand with two churches to study racial issues.

The family prefers that those who wish may make contributions in his name to the Ronald McDonald House, 10415 Euclid Ave, Cleveland, OH 44106 or to University Hospital Hospice Care, 4510 Richmond Rd, Warrensville Hts., OH 44128.

A Funeral Service will be held at 10am on Wednesday, July 12 at University Circle United Methodist Church, 1919 E. 107th St., Cleveland, OH 44106. FRIENDS MAY CALL AT BROWN-FORWARD, 17022 CHAGRIN BLVD, SHAKER HTS., OH, ON TUESDAY, JULY 11 FROM 2-4PM AND 6-8PM, AND 30 MINUTES PRIOR TO THE SERVICE (AT THE CHURCH). Interment, Lake View Cemetery.
To order memorial trees or send flowers to the family in memory of William Avery, please visit our flower store.