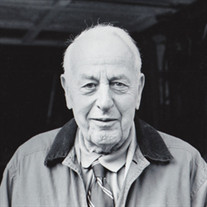 Willem B. K. Boom was born in Hengelo, a mid-sized industrial town in Twente part of the province of Overijssel in the eastern part of the Netherlands in 1921. He was the eldest son of Willem H. Boom, an engineer from Den Helder, and Louise M. de Hoop Scheffer from Amsterdam. Willem was named after his grandfather, Willem B.K. Boom, a naval officer and then harbormaster of Vlissingen in Zeeland.

Willem enrolled in the Delft University of Technology in 1939. His studies were interrupted in 1943 when the Germans, who occupied the Netherlands from 1940-45, required all students to sign a loyalty oath to the Third Reich. Willem, as did most students, refused to sign and went into hiding in the Eastern part of Netherlands to avoid being sent to Germany.

Willem resumed studies in Delft after the liberation of the Netherlands and graduated in '48 with a Masters in Mechanical Engineering. He followed in his father's footsteps and joined G. Dikkers & Co. N.V. in Hengelo, a manufacturer of industrial valves and pumps. While traveling for work to the United States on the Holland-America line, Willem met Florence Hopper. Florence was returning from a junior-year abroad in Geneva, Switzerland, to her home in Pasadena, CA. After graduating from Scripps College, Florence returned to Europe for further French language studies in Paris. Willem and Florence were married in Paris in 1950, and made their home in Hengelo. W. Henry Boom was born in '52 and Valerie J. Boom in '54.

At G. Dikkers & Co, Willem expanded the international and technical aspects of the company, and in '59 became Director. He furthered collaborations between Dikkers and the newly created Technical University Twente that opened in 1964. The late 60's and early 70's were difficult years for manufacturing in the Netherlands and steel companies such as Dikkers in particular. Dikkers was taken over by a British-American consortium in '71. Increasing labor unrest and consolidation of the take-over led to his resignation in '74.

After Dikkers, Willem joined "De Nationale Investerings Bank" (NIBC) in The Hague, created in '45 to finance the post-WW-II economic recovery of the Netherlands. Willem's role, which he loved, took him all over the Netherlands, to assess small and mid-sized companies for the bank. After 10 happy years, he retired from NIBC in '86.

Willem's lifelong love of nature and his native region of Twente resulted in service as member and chair of the board for the Natura Docet Museum (renamed Natura Docet Wonderryck Twente in 2013) in Denekamp, Twente from '67-'77. This regional natural history museum had a tradition of education and research, in particular with Dr. T. van der Hammen of the University of Amsterdam.

Willem also served on the "Tariefcommissie" (Tariff Commission) of the Court of Amsterdam until '91. The Tariff Commission (now the Customs Chamber) arbitrated disputes over import duties and taxation. The monthly meetings in Amsterdam allowed for meetings with old friends and his many (18) nieces and nephews who were increasingly gravitating towards Amsterdam.

In retirement, Willem and Florence split their time between Hengelo, their house in Le Bouchet, France and visiting their children and grandchildren in the US. He had time for his love of gardening and growing roses, long walks in the country with his dog Lucy and keeping his crack golf game in shape.

Throughout, Willem was a supportive partner for Florence as she pursued a career in art history and supportive father for his children as their careers took them from the Netherlands to the US. He loved fun and mischief either as participant or as supporter of his children's, nieces and nephews antics, and together with Florence organized innumerable fun adventures and excursions around the Netherlands. His fluency in English, Dutch and French, and always elegant attire gave him a cosmopolitan outlook but at heart he remained a simple man. Willem's love of nature and for his immediate and extended family kept him busy and very happy. The fact that his nieces and nephews called him "Daddy" reflected his interest and concern for them, and his role of loving patriarch of the family after his father died in '65.

Florence's unexpected death in '99 prompted permanent relocation in 2002 to Shaker Heights in the USA to be close to his son Henry and daughter Valerie and their families. The last few years were difficult. However to the end he maintained his positive and fun-loving spirit that kept his caregivers amused as he required increasing care for his Alzheimer's disease.


PDF Printable Version
To order memorial trees or send flowers to the family in memory of Willem Boom, please visit our flower store.