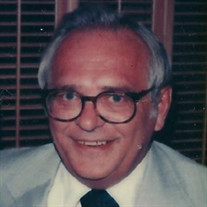 Dr. Willard Roland Disinger, born January 20, 1923 in Cleveland, OH and passed away peacefully January 7, 2018 at 94 years old in Yardley, PA. He was preceded in death by parents Leon and Edna Disinger and his wife of 72 years, Sarah Lillian (Sally) Disinger whom passed away 10 days prior.

Roland was a graduate of Ohio State University where he was a member of Sigma Chi fraternity, swim team, and marching band. After college, he went to medical school and was a dedicated physician practicing in the greater Cleveland area for over 40 years. He spent time between Ohio and Florida retiring later in Arizona. Throughout his life he was a dedicated husband and father, always doing everything for his family.

Daughter Linda Brinkworth and husband Dan and Linda's children: Carrie Mimnaugh and her children Meredith and Peter, David Laughter and wife Adrianne and children Cyrus and Parker, and Brittny Harris and husband Patrick and their daughter Hadleigh.

Son Tom Disinger and wife Nancy and their children Kate and Will.

A private service for family will be held at the end of the month, to contact the relatives please reach out to Brown Forward Funeral Home at (216) 752-1200.