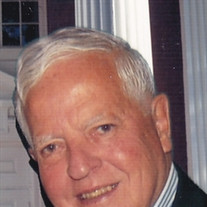 Walter K. "Bink" Brinn died unexpectedly on October 29, 2015. He lived in Shaker Heights, Ohio and wintered for the last 20 years in Naples, Florida. Family and friends mourn the loss of this vibrant and thoughtful man. He was born in Boston on October 31, 1932 and grew up in Waltham, Massachusetts. His dad Walter E. Brinn was a physical education teacher and a legendary high school hockey coach for Waltham High School. His mother Bernadette attended Smith College and was a homemaker. As a boy Bink played baseball, hockey and attended numerous Boston Bruins hockey games. He also sharpened skates and taped hockey sticks for players on teams that were coached by his father. Bink attended Waltham High School where he played varsity hockey and was the valedictorian in 1950. That year he also won the Bausch and Lomb Honorary Science Medal. Upon graduation he was awarded a full Navy ROTC scholarship to Tufts University. At Tufts, he played varsity hockey and earned a B.S. in Chemical Engineering. After his freshman year in 1951 he took his summer cruise as midshipman aboard the U.S.S. Missouri, BB 63. Upon graduation Bink became a member of the Tau Beta Pi honorary engineering society. After graduation he served in the U.S. Navy as an engineering officer on several aircraft carriers including the U.S.S. Gilbert Islands CVE 107, U.S.S. Antietam CVS 36, and the U.S.S. Leyte CVS 32.

Bink is survived by his wife Mary F. (Burke), whom he met at the Boston Skating Club. They were married on July 14, 1956 and were together for 59 years. He is also survived by children, Christopher Brinn of Shaker Hts., OH, Carolyn Dunn (Ray) of Greenwich CT., Keenan Brinn (Maureen) of Milton, Mass., Matthew Brinn (Sandy) of Pepper Pike, OH, and brothers Ronald C. Brinn, and Stephen J. Brinn (Ann). He is survived by grandchildren, who affectionately called him "Binky" and include Madeleine Dunn, Mary Carolyn "Mimi" Dunn, Alexander Dunn, Christopher Dunn, Keenan Brinn Jr. Matthew Brinn, Gregory Brinn, Hanna Brinn, and George Brinn.

Bink enjoyed a 50 year career with General Electric where he worked for GE Lighting in Cleveland, Ohio and Power Transformer in Pittsfield, Massachusetts. He specialized in metallurgy and was an expert in Tungsten and Molybdenum. He worked in various capacities including Project Engineer, Project Manager and Laboratory Manager. During his career his work supported lighting research, power transformer production, the Polaris and Minuteman missile programs and the Apollo space program. He was a patent holder and also developed systems to improve productivity in the lighting division. Bink was a strong supporter of the United Way and was also the President of the Cleveland Association of Research Directors from 1987-88.

While working and also in retirement, Bink enjoyed photography, mystery novels and racquetball. All of his friends and relatives know how he delivered actual 4 x 6 photographs rather than the email versions. When friends and relatives needed photos they often drew upon Walt's archive of slides and hard copy photos. In retirement, Walt always carried a short stack of his latest photos in order to show off his grandchildren and recent activities. Bink loved to vacation on Cape Cod and hadn't missed a single summer since he was a child. In recent years he visited the Cape in August so that he could cross paths with many other friends and relatives from the Boston area in what developed into a family reunion. He also loved to visit Naples Florida in the winter and he and his wife Mary cherished all of their fellow snowbird friends.

The family prefers that those who wish may make contributions in his name to The Church of the Gesu, 2470 Miramar Blvd., University Hts., OH 44118, where a Funeral Mass will be held Monday, November 2nd at 10:30 AM,