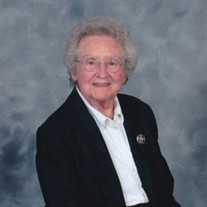 Virginia Clark Bishop was born in Cleveland, Ohio on January 24, 1920 and baptized later that year at the Church at the Covenant. Although her first home was in the city of Cleveland, she soon moved to the "country" in University Heights, to live closer to Laurel School, where she was an enthusiastic student. After graduating from Laurel summa cum laude in 1938, she attended Radcliffe College, and later, Case Western Reserve University. On February 15, 1941, she married her beloved husband, Sven Aage Langmack, with whom she spent sixty-two marvelous years, until his passing in 2003. She and Sven moved to Fort Knox, Kentucky during World War II, where Sven was stationed. There, she gave birth to her two elder sons Chuck and Chris.

In 1946, the family returned to Northeast Ohio and built their rural home in Gates Mills, where third son Clark was born. Virginia & Sven would call Gates Mills home for the rest of their lives. As a strong, active citizen in her community, "Virgie" worked tirelessly as a volunteer and leader of the Gates Mills Community Club, the PTA Board, President of the Garden Club, and as co-founder of the Friends of the Gates Mills Library. Her Gates Mills leadership roles continued on the Gates Mills Village Council (to which she was the first woman elected). She also served as President of the Laurel School Alumnae Association and volunteered countless hours at The Church of the Covenant.

Virginia most enjoyed spending time together with family and friends, old and new. However, she also enjoyed filling-in a good crossword puzzle, reading (especially mysteries), and watching tennis, football, and baseball. She treasured her time spent listening to classical music (especially fall-winter seasons at Severance Hall), exercising with friends 3 times a week, going to family members' numerous concerts, recitals, play productions and graduations, and regularly attending services at The Church of the Covenant. Throughout her life, she was steadfast in her love and support to her family as well as to her many friends, all of whom were truly important to her. Virginia was welcoming to all and for those fortunate to know her, she generously shared God's love and her faith through her life's devotion to family and service to others.

The family prefers that those who wish may make contributions in her name to The Church of the Covenant, 11205 Euclid Ave., Cleveland, OH 44106, where a Memorial Service will be held at 2pm on Wednesday, December 30. Private interment.
To order memorial trees or send flowers to the family in memory of Virginia Langmack, please visit our flower store.