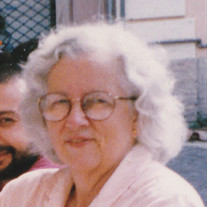 She was the beloved wife of Prof. Norman Krumholz. She was the loving mother of Laura Elizabeth Krumholz (Ronald Zartman) of Newburgh, OR, Andrew Martin Krumholz of San Francisco, CA and the late Daniel Izak Krumholz, and the dear sister of Julie Robson (Harold Robson) of Tucson, AZ.

The family prefers that those who wish may make contributions in her name to the Scholarship fund of Levin College of Urban Affairs at CSU, 2121 Euclid Ave. UN 440, Cleveland, OH 44115.

PDF Printable Version
To order memorial trees or send flowers to the family in memory of Virginia Krumholz, please visit our flower store.