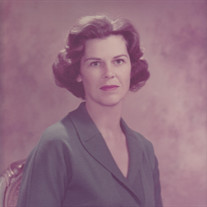 Virginia Chiles Bruch, 96, passed away peacefully on December 27, 2016 at Fairmount Health Center, part of the senior community formerly known as Breckenridge Village, and now as Ohio Living, in Willoughby, Ohio. Longtime residents of Cleveland Hts., Ohio, she was preceded in death by her husband of more than 70 years, Karl F. Bruch Jr. She is survived by her three children, Sally Bruch Sorensen (Ricardo Uwe Sorensen), Karl F. "Fred" Bruch III (Karen Perme Bruch) and Christopher C. Bruch (Karen McKenna Bruch). She is survived by 13 beloved grandchildren and 17 great grandchildren. She is also survived by her brother-in-law Frank Osborne Bruch (Sally Rounds Bruch) and many nieces and nephews. She was preceded in death by her parents, Frank and Leonora Chiles, her sister Sarah Chiles Blackhurst Carter, her sister-in-law Barbara Bruch Nash (John F. Nash), and her brother-in-law Peter A. Bruch (Martha Dangler Bruch).

Virginia attended school in Cleveland Hts. and graduated from Hathaway Brown School, class of 1938. She attended St. Luke's School of Nursing, but left that career choice when she married Karl on September 7, 1940. Virginia was a volunteer at St. Luke's Hospital, Planned Parenthood (Maternal Health), participated in the Junior League, and helped at the White Elephant Sales among other things. She was a fifty year member of the Shaker Lakes Garden Club, and served one term as president. She enjoyed playing tennis for many years with regular groups of friends at the Cleveland Skating Club, and The Racquet Club. She enjoyed gardening, golf, and, luckily, travel because Karl developed a big interest in travel adventures. She adapted to life involving small planes (a tiny 2 seat ERCoupe), a trailer, and finally on sailboats and other boats as Karl became interested in those hobbies over the years.

In lieu of flowers, the family prefers that those who wish may make contributions in her name to Ohio Living, Home Health and Hospice, 36855 Ridge Rd., Willoughby, OH 44094 or to Hathaway Brown School, 19600 North Park Blvd., Shaker Hts., OH 44122 or the charity of your choice. And finally thank you to the staff at Ohio Living, Home Health and Hospice. Memorial Services will be held at Fairmount Presbyterian Church, 2757 Fairmount Blvd., Cleveland Hts., OH 44118 on Saturday, May 27th at 11 AM.
To order memorial trees or send flowers to the family in memory of Virginia Bruch, please visit our flower store.