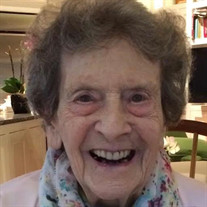 She was a resident of the Weils Memory Center in Bainbridge, Ohio. Mrs. Bowen, known as Ginny, was born and raised in the Queen Anne Hill section of Seattle, Washington. She was the daughter of Albert C. and Anna M. Phillips.

She attended the Sorbonne in Paris until the war broke out and she returned from France in 1938 and was subsequently graduated from the University of Washington. After graduating from college, Ginny was a bridal consultant until 1946 when she married William A. Bowen of Indianapolis, Indiana, who had been stationed in Seattle in the Navy during World War II. After being married, they moved to Bristol, Rhode Island, where they raised two daughters. They moved to Gates Mills, Ohio, in 1973.

In Cleveland, Ginny was an active tennis player and early member of the Cleveland Racquet Club, playing tennis into her '90's. She was a committed volunteer with the American Red Cross, Valley Save-a-Pet, and at Hillcrest Hospital. Her favorite card game was bridge which she played every week until a week before she passed away.

She was preceded in death by her parents, her brother, and her husband. Survivors include her children, Sarah Bowen King (Jack) of North Kingstown, RI; Susan B. Brown (Scott) of Gates Mills, Ohio; four grandchildren; and four great-grandchildren.

A Memorial Service will be held April 29th, at 3pm in St Hubert's Episcopal Church, 8870 Baldwin Road, Kirtland Hills, OH 44060.
To order memorial trees or send flowers to the family in memory of Virginia Bowen, please visit our flower store.