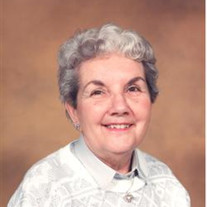 Viola was born on May 30, 1917, the oldest child of Gertrude and Edward Smith. At the time of her birth, her favorite aunt commented that she looked just like a little dolly, and the nickname stuck. Her father, Edward was raised on a farm in Ripley County, Indiana. He came to the city to pursue a career as a machinist for White Motor Company. Still, the family would return to Southern Indiana every year during threshing season; so "pop" could help on the farm. Dolly was not particularly fond of those trips - she had to eat too many vegetables.

Dolly graduated from Garfield Heights High School in 1935 with significant secretarial skills (shorthand & typing). She soon married her first husband, Harold "Bud" Sutherland. After Bud's untimely death as a lineman for Cleveland Municipal Light and Power, Dolly went to work for Harris-Seybold printing press manufacturers, where she did office work and managed the company credit union.

During World War II, Dolly and Louis "Lou" Steiger fell in love through letters. Lou arrived home from the war on December 8, 1945, and on December 25th, Christmas Day, they were married. During the twenty-seven years of marriage, the couple raised two children, the late Sherry Lou "Steiger" Marcuz, born in 1947, and Mark Louis Steiger, born in 1953. After Lou's death in 1973, Dolly went back to work in the reproduction department of McKee engineering. In 1975, Dolly married Urshell "Whitey" Justice, a marriage that lasted fourteen years. In the early 1990's, she became active in the Brooklyn Heights, Ohio Senior Citizens Club where she served as Vice President and planned most of the group's outings, along with serving as "sunshine chairman."

Dolly loved music, singing and dancing, knitting and various crafts; but mostly, Dolly loved people. She made friends easily and valued friendships. She loved to talk sharing the latest news with relatives, friends, and neighbors over a cup of tea. As we mourn her loss, we also celebrate that she is now basking in the glory of so many saints who have gone before her; and we praise God for the love we have shared.

The family prefers that those who wish may make contributions in her name to Hospice of the Western Reserve, 29101 Health Campus Dr., Ste. 400, Westlake, OH 44145. A Funeral Service will be held at 12:30 on Saturday, February 6 at the North Olmsted United Methodist Church, 4600 Dover Ctr. Rd., North Olmsted, OH 44070. FRIENDS MAY CALL FROM 11AM-12:30PM AT THE CHURCH.
To order memorial trees or send flowers to the family in memory of Viola Justice, please visit our flower store.