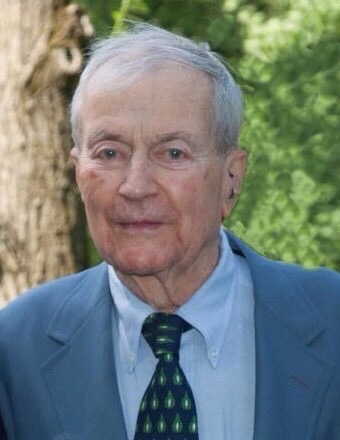 VAUGHN POTTER RUBIN age 96 passed away peacefully of natural causes on September 12, 2020 with family by his side. Born in Cleveland, OH on February 3, 1924 to Monroe Frederick and Ruth (nee Potter) Rubin (granddaughter of Horace Potter of the prominent local jewelers Potter & Mellen). He attended Roxboro Elementary/Middle School and Cleveland Heights High School (‘41) before attending Cornell University (‘46) where he was a member of Delta Kappa Epsilon. He was preceded in death by his brother Buford P. Rubin and sister Raenelle (Rubin) Warren. Vaughn is survived by his wife Sara “Sally” Sterling and daughters Regina Rubin Cody (William F. Cody, Jr.) of Shaker Hts., OH and Amy Rubin Naremore (James L. Naremore) of Indianapolis, IN, as well as five grandchildren Alexander and Patrick Naremore, and Sara, Blake, and William Cody III.

After an initial 4-F deferment and minor medical procedure, he willfully served in the US Army from 1943-1946 during World War II as a sergeant in active combat during the Battle of the Bulge in France and Germany. Shot in Hatten, France during a siege on his unit, the 315th Infantry of the 79th Division, he earned a Purple Heart. A Plain Dealer article in 1945 described how he entered a bombed out building, heroically saving the life of a fellow Clevelander, against standing orders. MIA notices even hit the hometown press 3 different times during his time in service. During the Occupation, on Christmas Eve of 1945, Vaughn and a few buddies brought candy they had saved up from their rations to give the children in a small Polish DP (Displaced Persons) Camp outside Nuremburg. It was a memorable night culminating with a moving rendition by six GI’s of Silent Night.

Returning home he worked professionally managing a portfolio of investment properties and radio stations across Ohio, including WMAN in Mansfield. He met Sally in the mid 1950’s when she moved to Cleveland along with her parents when her father was appointed Chairman of the Board of Cleveland Cliffs. They married later than many of their friends but made up for lost time. A honeymoon skiing in the Alps kicked off a lifetime of adventure and travel with his beloved Sally for 60 years. They often danced until dawn traveling to the corners of the world but were always happy to return home where Vaughn would set his sights on their next trip.

Vaughn loved the West. The Cleveland based Three-Corner-Round burro pack trip in the High Sierras introduced him as a teenager to the mountains and led to his infatuation with skiing. He enjoyed a decades long annual men’s ski group to Vail Colorado which began  shortly after it opened in 1966. In fact they were among the earliest of USA skiers in Aspen, Vail, Sun Valley, Michigan, New York, PA and Canada. He felt more alive in the mountain air where he and Sally made a second home in Sun Valley enjoying the local renowned Jazz Festival, outstanding Symphony and calling it a day with a nightcap listening to Joe Fos in the Duchin Lounge at the Sun Valley Lodge.

Vaughn was often described as a real character - eccentric and charming. He spent a lifetime running from death and it all started with Adelle Davis’ Let’s Get Well. Always working on self-improvement he was not afraid of the self-help section of the bookstore. Whether it was I’m OK, You’re OK or The Power of Now, or The Three Pillars of Zen there was always wisdom that informed his life. He practiced yoga daily, tried transcendental meditation, and abandoned primal scream therapy for Zen Buddhism. A true health nut, eating sardines and fish oil supplements before anyone ever heard of the Mediterranean Diet, he subscribed to the Harvard Health Newsletter prescribing his own mega-dose vitamin regimen. He embraced other “battles of the bulge” with Tiger’s Milk supplements in the 70’s, the latest starvation diets of the 80’s, or high-fat pre-keto fads all in an effort to repress his craving for sweets - a simple Hershey’s Kiss melted his heart.

He was a genuine sports enthusiast, with copious notes mastering mogul techniques or fine-tuning the short game of golf, and fearlessly tried roller blading at 88! Exercising every day, he could often be seen on epic long distance walks with iPod in hand singing along to the Bossa Nova, New Orleans Jazz and thousands of Big Band standards. He was a regular at NightTown and a hunter of late-night jazz clubs in cities he visited. A collector of music that brought him endless hours of joy and a collector of esoteric bits of literature. He could be heard periodically reciting Hamlet, Ogden Nash or the Salutation to the Dawn.

VPR was a man of many collections; a sport coat for every occasion; a custom-crafted rack for hundreds of ties; formal attire at the ready; donning signature sunglasses indoors and out; an array of watches; and many, many wonderful friends. He never needed an excuse to suit up, entertain or be entertained. Never a club he didn’t love or a party he declined to attend. He was a member of the Chagrin Valley Hunt Club for 47 years, Cleveland Skating Club for 58 years, Kirtland Country Club for 28 years, Cleveland Racquet Club, Tavern Club, Sanibel Yacht Club (he didn’t even like water or boats unless it was the QE II), the Fraternal order of Eagles in Chagrin Falls and the American Legion in Sun Valley, Idaho. He topped off an abundant life with a Cleveland Honor Flight trip for Veterans to Washington, DC and Arlington Cemetery.

He lived a spirited life with verve, vim and vigor. He valued family and friends above all else and loved his family home in Shaker Heights of 80 plus years. Vaughn had a wry, self-deprecating sense of humor and quick wit. He was an eccentric mix of high-brow and low-brow and could raise one eye brow like no other! He brimmed over with quiet laughter just ahead of telling a story. If funny enough to him, he was barely able to get through the whole tale. He would have his laugh at it before he could utter the words. Vaughn adored his grandchildren and with his usual dry twist he would exclaim, “if it weren’t for me, I wouldn’t have all of you to love.”

As a perpetual news-junkie, he always started the day scrolling through the obituaries. Well, Dad, I hope this ranks among the top – we love you!

Private family services will be held at Lake View Cemetery with a Celebration of Life to be scheduled at a later date. In the meantime, please, raise a glass to toast a life well lived – and make it an extra dry gin martini on the rocks with 3 olives and extra gin!!!

In lieu of flowers, memorial gifts may be made in Vaughn’s memory to the Cleveland Museum of Art, 11150 East Boulevard, Cleveland, OH  44106 and Geauga Humane Society Rescue Village, 15463 Chillicothe Rd, Russell Township, OH  44072.

To order memorial trees or send flowers to the family in memory of Vaughn Rubin, please visit our flower store.