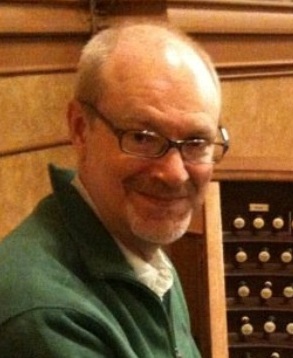 Timothy D. Robson died March 15, 2022  at University Hospitals Ahuja Medical Center.  He was a church musician, librarian, and writer. He was born July 26, 1952  to Warren Aughey Robson and Susan Jane Manson Robson in Norfolk, Virginia, and was raised on his family's farm in Scranton, Iowa. He began piano studies with his great-aunt Elsie Fosket at age 8 and later studied in the preparatory program at Drake University in Des Moines. He earned a  B.A. in Church Music from Drake, where his  principal teacher was Carl Staplin, and an M.A. in Music History and M.L.S. from Case Western Reserve University in Cleveland.

Tim had been recovering from surgery for renal cancer on February 22, and had been scheduled to return home from the University Hospitals Rehabilitation Hospital on March 17. On March 15 he suffered a cerebral hemorrhage from which he would not recover.

Tim wrote his own short bio for the Cleveland Classical website:

Timothy Robson was for 37 years a librarian at Case Western Reserve University, ending his career as Associate Director for Academic Engagement Services in the university’s Kelvin Smith Library. In addition to being a regular contributor to ClevelandClassical, Robson is the regular Cleveland correspondent for Bachtrack.com, the London-based classical music site. Robson was Director of Music at Euclid Avenue Congregational Church in Cleveland for 27 years. Since then he has become an in-demand substitute organist in many churches in Northeast Ohio, and served as Interim Director of Music for Fairmount Presbyterian Church. Since Christmas of 2019 he has been organist at St. Barnabas Episcopal Church in Bay Village. He has performed many recitals in the area, making a specialty of performing music from our time, and has played world premieres of several works written especially for him. He has played many duo recitals with English Horn player Cary Ebli.

Tim leaves his husband, George, whom he officially married on February 19 after more than forty years together. He wrote to friends on that day “After forty years maybe it's time to try something different,” and he took great delight in introducing George as his husband. He is also survived by his brother, Allen Robson (Cheryl) of Scranton, Iowa and sister Martha Pierce (Joseph) of Polk City, Iowa, along with four nieces.

Tim Robson’s reviews for ClevelandClassical and Bachtrack were scholarly in tone but down-to-earth in their appeal. He regularly covered Cleveland Orchestra concerts as well as diverse other musical events, and filed nearly 200 reviews for Bachtrack alone. He  was proud of his upbringing in rural Iowa — the blog he kept until the end of 2006 was titled “Virtual Farm Boy” – and he faithfully returned to spend time with his family and attend and report on the Iowa State Fair each year.

His musical interests were wide-ranging — a trip to England a few years ago included standing in the rain for hours to attend the Festival of Nine Lessons and Carols at King’s College, Cambridge, and a brief trip to Italy found him joining the mosh pit for a concert by Lady Gaga. He had particular affection for the music of Charles Tournemire (which he coached with Jean Langlais in Paris) and Benjamin Britten. He took special pleasure in adding the work of young, aspiring composers to his working repertoire.  Tim was first and always a church musician.

Tim was a member of Trinity Cathedral, 2230 Euclid Ave., Cleveland, OH 44115 where a Memorial Service will be held in-person Saturday, April 23, 2022 at 10 a.m.  It will be livestreamed on facebook.com/trinitycleve and the Trinity Cathedral homepage, https://trinitycleveland.org

Grateful acknowledgement is made to Daniel Hathaway and ClevelandClassical, where portions of this obituary first appeared.

To order memorial trees or send flowers to the family in memory of Timothy Robson, please visit our flower store.