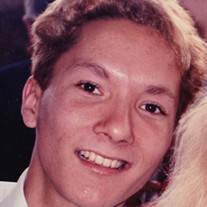 Beloved son, brother and uncle, Timothy Prajon Garon, was relieved of his earthly struggles on April 5, 2016 and is resting now in eternal peace.  Timothy was born in Thailand on July 14, 1973.  He came to live in the United States with his adoptive parents Gail and Robert and joined older siblings Lynne, Steven, and David.  The family moved to Cleveland in 1977 and settled in Shaker Heights.  He was soon joined by sister Hilary.
Timothy attended Shaker public schools in his early years, later graduating with honors from Walsh Jesuit High School in Cuyahoga Falls, Ohio in 1992.  He studied at Xavier University in Cincinnati, Ohio, before beginning a long culinary career.  He first worked and trained under Parker Bosley, widely considered to be the patriarch of Cleveland's local food movement, at Parker's New American Bistro in Ohio City on the west side of downtown Cleveland.  Timothy enjoyed several culinary positions at Cleveland restaurants before moving to Louisiana.
Timothy returned to Cleveland in January of 2016 to be near family and they cherish the time spent with him before his life was cut short. He is survived by his father, Robert Jacob Garon, his mother, Gail Sullivan Garon, and his siblings, Lynne Garon (Gene Szuflita and children Jacob and Samuel), Steven Garon, David Garon (Katherine Meyers Garon and children Andrew and Elizabeth), and Hilary Garon (John Titley and children Morgan and Audrey).  The family prefers that those who wish may make contributions in his name to The Cleveland Animal Protective League, 1729 Willey Road, Cleveland, OH 44113. A Funeral Mass will be held, Saturday, May 21st at 2PM in Our Lady of Peace Catholic Church, 12601 Shaker Blvd., (two blocks west of Shaker Square), immediately followed by a reception at The Shaker Heights Country Club,
3300 Courtland Blvd., Shaker Hts., OH 44122.