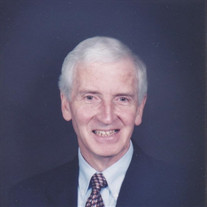 Born and raised in Milwaukee, WI, Tom was a strong competitive swimmer from summers spent at Moose Lake with his sister Sandy. He also enjoyed playing the flute in high school. He went on to study Classics at Yale University, where he continued to excel academically. While traveling to spend his junior year abroad, Tom met his future bride, Alice-Mae. He continued his studies at Yale, earning a Master's and then a Doctorate in Classics. Tom taught for 8 years at Columbia University before moving on to the University of Connecticut. He remained at UConn for the duration of his career. Alice-Mae and Tom raised their children, Betsy and Bill, in the lovely community of Storrs, Connecticut, less than a mile from the campus. In addition to being very involved in University activities, Tom was extremely active in his church community. He served as a deacon, as a clerk, and as chair of the church council, and he also helped raise funds for various building improvements to increase accessibility.

To be closer to family, Tom and Alice-Mae moved to Beachwood, OH in January 2012, and immediately he became active in their new community. Through Plymouth Church, Tom volunteered as a tutor for elementary students in the Cleveland public schools, sang in the Plymouth Church Choir, served on the Arts Plymouth committee, and attended meetings of "Fossil Fuel". He thoroughly enjoyed his extended Cleveland family including in-laws of in-laws of in-laws, who included Tom and Alice-Mae at family gatherings. Some of his favorite family activities included watching UConn basketball games with son-in-law Steve; solving cryptic crosswords with daughter Betsy; debating current world politics and history with son Bill; identifying and discussing birds with daughter-in-law Amy; recounting family stories with sister Sandy; fostering a love for nature in grandson Michael and working on creative projects with grandson Evan on his workbench that they built together. But most of all, Tom shared everything with Alice-Mae, the love of his life, with a profound love and tenderness reflected in all their shared experiences. Tom's relationships were deep and meaningful and he was beloved by many members of the community. The family appreciates the many communications of support, and consistent themes of remembrance are Tom's erudition, his thoughtfulness, and his kindness.

To order memorial trees or send flowers to the family in memory of Thomas Suits, please visit our flower store.