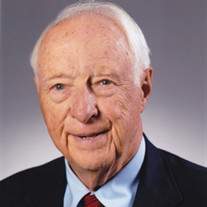 Born on May 15, 1920, his parents were Margaret Armstrong and Clayton A. Quintrell of Lakewood, Ohio. He was a dedicated student - athlete at both University School (1938) and at Princeton University (1942). In World War II, he received the bronze star for his service as a Captain with the 7th Infantry Division. Upon return from the war he attended Harvard Law School, graduating in 1948. He and his wife were married on July 7, 1950.

After his retirement, he became active in land conservation. He organized and was an Officer/Trustee of the Gates Mills Land Conservancy, the Chagrin River Watershed Partners, Inc., and Grand River Partners, Inc.. He was on the Executive Committee of the Coalition of Ohio Land Trusts and was on the Ohio Advisory Board for the Trust for Public Land. He also served on the National Council for the Land Trust Alliance as well as on its Conservation Defense Advisory Committee.

He was proud that the Gates Mills Land Conservancy was accredited in December of 2013 by the land Trust Alliance Accreditation Commission. It was the third land trust in Ohio to be accredited and the first all volunteer Association.