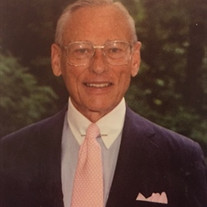 Theodore W. Jones passed away with his two daughters, Jenny Beth Jones and Pamela Jones, by his side. His family and friends will remember him most as a man of integrity and principle and for his deep commitment to his country, family, and work.

He was born and raised in Warren, Ohio. Ted enlisted in the U.S. Army Reserves and served as a combat infantryman fighting with the 104th Infantry Division in Germany. He received his B.A. in history from Western Reserve University and his law degree from its law school in 1951. He worked in litigation for 10 years at the law firm of Burgess, Fulton and Fuller until joining the Glidden Company as Assistant General Counsel. In 1966, He joined National City Bank as Vice President and General Counsel and remained there for 29 years retiring in 1988 as Executive Vice President and General Counsel of National City Corporation and Manager of the Company's Administrative services, and Chairman of National City Trust Company in Palm Beach, Florida. After retiring from National City, he returned to the practice of law and joined the Business Group at the Cleveland law firm of Baker & Hostetler where he remained until his retirement in 2000.

Despite Ted's tendency to downplay his accomplishments, he was engaged in many civic activities. He served as Chairman of the United Way of Greater Cleveland, and President of the Board of Trustees of the Cuyahoga Unit of the American Cancer Society. In addition he served on the Board of Trustees of Cuyahoga County hospitals, now Metro Health System, the Federation for Community Planning, the Citizen's League Research Institute, He also served on the Advisory Board of the Salvation Army of Greater Cleveland, and periodically on the Dean's Advisory Council of Case Western Reserve University's School of Law. He served as a member of the School's Society of Benchers, an organization of the Law School's distinguished alumni. He was also an active fundraiser at both Case Western Reserve University and its School of Law and received the President's Award at the 1979 commencement ceremonies for his service as Co-Chair of the Resources Campaign of Western Reserve College.

Whether it be for a friend or colleague struggling through a divorce, a death, emotional difficulties, or in defending women's equal treatment in the workplace, family and friends regarded Ted as steadfast and forthright and willing to speak up for what he thought right. He listened carefully, analyzed astutely, and judged fairly. His grandchildren loved him for the warmth and affection he showed them, for his love of history and the USA and for the wonderful stories he told that spanned his full 91 years.

The family prefers that those who wish make contributions in his name to The Memorial Fund of Fairmount Presbyterian Church - Attention Boys and Girls Club, 2757 Fairmount Blvd., Cleveland Hts., OH 44118 where Memorial Services will be held on Monday, November 2nd at 11:00 AM. FRIENDS MAY CALL AT BROWN-FORWARD, 17022 CHAGRIN BLVD., SHAKER HTS., OH 44120 ON SUNDAY, NOVEMBER 1ST FROM 5-7:00 PM.