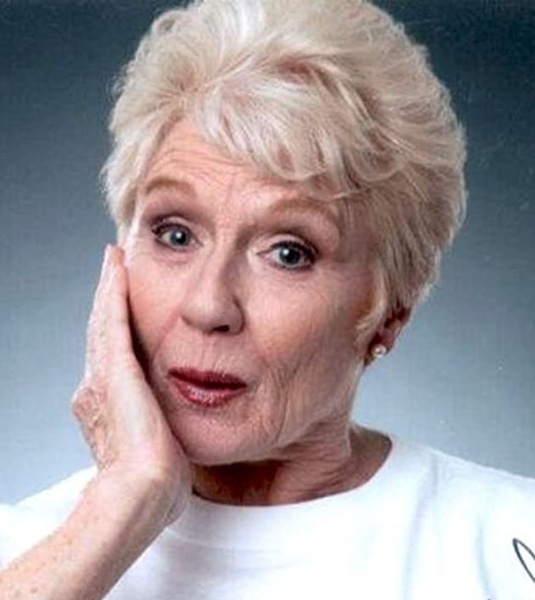 Voice actress Thea White, known for voicing Muriel Bagge on Courage the Cowardly Dog, has died. She was 81.  White passed peacefully on Friday, July 30 at 11:05 am at the Cleveland Clinic with her brother, John Zitzner at her side.  She suffered from complications from her 6 hour liver cancer surgery on July 20.  She reported on a July 25 video to her family that she was recovering and hoped to see them soon!

“Sadly we lost our legendary Feefer (the voice of Muriel) on Friday morning after she fought hard with courage to try to beat her liver cancer and to resume life or to die trying. (She ended up with an infection after cutting out the damn cancer),” he shared on Sunday.

Born in Newark, NJ on June 16, 1940, she was a long time resident of Caldwell and a member of the First Presbyterian Church at Caldwell.  At the age of 18, she was only one of ten Americans selected to attend The Royal Academy of Dramatic Art in The United Kingdom.  She sailed from New York City to London on The Queen Mary.  During her life she traveled throughout all of the United States of America and worldwide while pursuing her career in the theatrical world. In addition, she worked at The Livingston Library as The Senior Happenings Coordinator.

She was in Dallas doing Goodbye Charlie at a dinner theater when she met Andy White, who was working as a drummer for Marlene Dietrich in her concert act.

Her future husband, White, a session drummer from Scotland, had played on recordings of “Please Please Me,” “Love Me Do” and “P.S. I Love You” with The Beatles in the early 1960s.

The connection got her a gig as Dietrich’s assistant. “This was toward the end of her career, but she was wonderful, so nice to everyone,” White said in 2002. “She would walk around all day kind of slumped over and sagging and then, at night, she would tape her face back, put on a wig, pull herself up and perform, and she was really something.”

Thea became a librarian after marrying White but returned to acting after taking a phone call at home from a producer seeking someone with a Scottish accent for a cartoon.  “I used to be an actress and my husband is a Scot, and I can do the accent, so why don’t I audition?” she told the caller. That got her hired as Muriel, on Courage the Cowardly Dog.  White worked on all 52 episodes of “Courage,” which ran for four seasons, from 1999-2002. The cartoon was a product of The Chicken From Outer Space (1996), an Oscar-nominated short film written, directed and produced by John R. Dilworth.

White returned as Muriel in the 2014 short The Fog of Courage and last year in the video Straight Outta Nowhere: Scooby-Doo! Meets Courage the Cowardly Dog, which will be released in September, 2021.

She was a loving daughter, sister, wife, aunt who will be deeply missed.  Predeceased by her parents Arthur S. Zitzner Senior and Theatrice E. (Née Hazard) Zitzner and her husband Andrew McLuckie White.  She is survived by her brothers A. Stewart Zitzner Jr., and John Zitzner and John’s wife Peg, as well as many nieces, nephews, grandnieces and nephews and great grandnieces and nephews and many, many friends and tens of thousands of Muriel Bagge / Thea White fans.

Per Thea’s request, there will be a graveside service for family members only at some point in the future.  In lieu of flowers contributions may be made in her memory to either the Zitzner Music Fund at First Presbyterian Church at Caldwell,   www.firstprescaldwell.org/,   The Actors Fund www.actorsfund.org/ , or Friends of Breakthrough Schools www.breakthroughschools.org