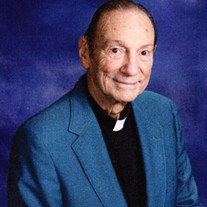 David Wallace Sherwin was born the 4th child, of five, to Catherine Smiley Sherwin and Lisle John Sherwin on March 13, 1929, in Huntington Park, California. David moved with his family to Santa Ana in 1936. He graduated from Santa Ana High School in 1946. He received his Associates of Arts degree from Fullerton Junior College in 1948 where he was a member of the Alpha Gamma Sigma Honor Society and one of five student commencement speakers. He completed his B.A. in Economics at the University of California, Berkley in 1949. David received his Bachelor of Divinity from Pittsburgh Xenia Seminary in 1954 and a Masters of Theology in 1961. David was (ABD) "All But Dissertation" on his D.Min. from San Francisco Theological Seminary which he attended in the late 1970's.

In 1954 David spent five months traveling in Europe, Egypt, the Sudan and Palestine. He spent six weeks doing archeological work at Beth-El. This was a significant journey for him and he often recalled his adventures in story for sermons and general conversation through out the remainder of his life.

David and his family traveled the continental United States extensively. They enjoyed many summer vacations visiting national parks and historic sites along the road from Cleveland to California when they would return for their annual visit with family. Each year they would take a different route and see different sites, museums, and parks. David especially loved San Francisco, Lake Tahoe, and Ghost Ranch, New Mexico.

David and Laila were married just shy of 40 years when Laila died on February 18, 1997. David and Laila had three daughters, Sharon Marie Sherwin (1958), Sheila Catherine Sherwin, (1966, deceased 1966) and Catherine Ann Sherwin (1967). After Laila's death, David married Nancy Hardy on September 4,1999. Nancy and Laila had been PEO sisters and were both active in Church of the Western Reserve. Nancy and David met at Church of the Western Reserve.

David was a life long, active member of the Kiwanis Club International, serving in many positions within the organization, including Chapter President of the Lander Circle Club. David was also an active member of each Presbytery in which he was a member. He held many positions and chaired numerous committees. He served as Moderator of the Cleveland Presbytery, was a delegate to General Assembly, and worked on committees of the Synod of the Covenant. David was a man of faith with strong convictions of his heart, mind, and spirit. David enjoyed playing tennis and Scrabble throughout much of his life.

The family prefers that those who wish make contributions in his name to Hospice of the Western Reserve, 300 E. 185th St., Cleveland, OH 44119 or to Church of the Western Reserve, 30500 Fairmount Blvd., Pepper Pike, OH 44124 where Funeral Services will be held Saturday, July 25th, 2015 at 2 PM. FRIENDS MAY CALL ONE HOUR PRIOR TO THE SERVICE AT CHURCH. Interment West Lafayette, OH.


PDF Printable Version
To order memorial trees or send flowers to the family in memory of The Sherwin, please visit our flower store.