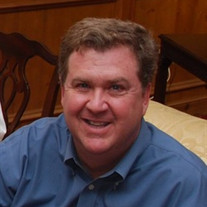 Ryburn Taylor, age 54, died peacefully on Sunday, April 3, 2016, after a two-year battle with cancer. He arrived with great fanfare on July 7th, 1961, in Dayton, Ohio to the excitement of Alex Taylor and Sandy Taylor (nee Ryburn). He took great joy in playing gorilla with his siblings, Cordy Taylor and Taylor Estes (nee Taylor). He attended University School, where his height didn't help the basketball team, but at least he was an outstanding long-jumper.  He later attended Trinity University where he was a proud member of the group of friends masquerading as a fraternity, Alpha Psi Omega, at one time serving as President.  He also managed to convince Laura Piper to go on a date with him.  They were married on August 23, 1986.  Their children, Amanda Taylor and Wilson Taylor have generally thought that a good decision.


In 1984, he began at Pioneer-Standard Electronics as a Field Application Engineer and after completing his MBA at Cleveland State University in 1991, eventually rose to be a Director of Engineering. From 1996-1998, Ryburn enjoyed eating oranges, pomegranates and grapefruit fresh off the trees in Northern California while working more closely with Intel.   In 2003, when Ryburn's division at Pioneer Standard was acquired by Arrow Electronics, he discovered his love of frequent flier mile accumulation.  He also enjoyed the cross-training program where he got to try other people's jobs while they were on sabbatical.  In 2009, he joined Congatec, later becoming the Director of Sales.  Being a consummate people person, and an engineer at heart, he loved helping to build the sales team.

He was active in civic life, serving as a board member of the Orange Community Education & Recreation Commission. He was proud to be part of the team that passed the levy in 2005.  He also loved serving as the liaison between Orange Rec and the Pepper Pike City Council.  Ryburn was active in Boy Scouts, the best part of which was camping with Wilson and his troop.  He loved volunteering for the Orange High School Band and Swim Team ensuring that all of Amanda and Wilson's most embarrassing moments would be catalogued for years to come.  Ryburn was a dedicated member of the Music and Worship Commission at the Federated Church in Chagrin Falls.  He was most moved by ushering at the Christmas Eve Candlelit service and when he would serve communion with his father and his son.

Ryburn was a man who loved family traditions. He believed the best family vacations included visits with relatives and friends along the way; that golf was great, but golf with costumes was better; and the best way to get anywhere was by road trip.  In his home life, he was chief tortilla maker, wood splitter, and unofficial domestic electrician. There are also at least a million other things that he did that left the world better than how he found it, but word-count limits our ability to share it all here.  He was a heck of a guy.

While we're sad to have lost him, he will no doubt be excited to see his mom, Sandy Taylor, and visit with friends and family, including Caroline Taylor (nee Wagley) and Carolyn Piper Gearhart (nee Loewer). Along with his wife and children, Ryburn will be much missed by his father, Alex Taylor (Alice) and his siblings, Cordy Taylor (Melinda) of Pedricktown, NJ and Taylor Estes (Bill) of Carmel, IN.  He was a much loved step-brother of Heather Wagley, Mary Galeti (Russell), Mike Hannon (Ginger), Kathleen Wagner and Beth Furlong (Bryan).  And there are countless cousins, nieces and nephews who will miss his playful spirit.

We have been grateful for all the outpouring of love, coldcuts and bundt cakes. Should you feel moved to honor Ryburn, there are three organizations that have been close to our hearts, especially in the last few years:

The Gathering Place is a cancer support center that hosts a support group, which Ryburn attended.  He really appreciated that it was a group of people sharing their experiences, their fears and their hopes.  Ultimately, we were most grateful for the shared camaraderie.   University Hospitals Seidman Cancer Center, in Honor of Dr. Elliot Dickman, M.D., PhD.: https://secure.uhgiving.org/SSLPage.aspx?pid=1125&frcrld=1 Dr. Dickman was a part of our family's journey from the beginning.  He was an advocate and ally and went above and beyond the traditional doctor's call of duty.  On the day Ryburn died, Dr. Dickman shared that it was an honor to battle cancer with him.  We all feel the same.  It was a long hard road, but it would have been much harder had it not been for Dr. Dickman and his team.   The Federated Church, for the Worship and Music Commission: (76 Bell St., Chagrin Falls, OH) The Federated Church has been an integral part of our family life, and Ryburn enjoyed serving the church community in a variety of ways.  He would love if others could enjoy the moments of faith and community he had through the important work of the commission.


PDF Printable Version
To order memorial trees or send flowers to the family in memory of T. Taylor, please visit our flower store.