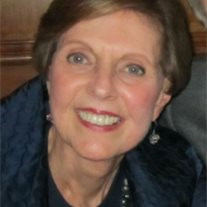 Susan Clegg, a much loved and admired member of the Cleveland community, passed away peacefully at home on December 1 after a lengthy illness.

The daughter of Adrian and Patricia Kline, Sue grew up in South Bend, Indiana, where she was born on November 23, 1940.  She went to St. Joseph High School there and on to Ball State University in Muncie before joining the United Airlines stewardess corps.

Around this time she met Michael Clegg, and they married in 1965.

After leaving United and moving to Cleveland, Sue became a consultant for the Fashion Institute of America, counseling wives of executives on how to look their besta�"an interest that came naturally. In high school, as her sister attests, she spent every dollar she earned babysitting on clothes. She would go on to work with Cindy Denney at Executive Arrangements, helping people relocate smoothly into the area.

Art and design were other interests, as was volunteerism, and she was an active and longtime volunteer at the Cleveland Museum of Art. She was also a member of the Junior League.

Sue was devoted to her many friends and family. She loved good conversation and was fun to be with. As a birthday present for each of her four grandchildren when they turned thirteen, she took them on the dream trip of their choicea�"be it to Hollywood or New York Citya�"and enjoyed every minute being with them.

Besides Mike, her devoted husband of fifty years and past president of Ostendorf-Morris, Sue is survived by their three children: Chris Clegg and his wife Kate, Tracy Clegg Philbin and Scott Clegg, all of Cleveland; four grandchildren, Lexi and Ben Clegg, and Maggie and Jack Philbin; her sister Jane Molony and her husband Clem of Menlo Park, California; brother Ned Kline and his wife Cheryl of La Luz, New Mexico.

The family prefers that those who wish may make contributions in her name to The Michael A. and Susan K. Clegg Family Fund of the Cleveland Foundation, 1422 Euclid Ave #1300, Cleveland, OH 44115.


PDF Printable Version
To order memorial trees or send flowers to the family in memory of Susan Clegg, please visit our flower store.