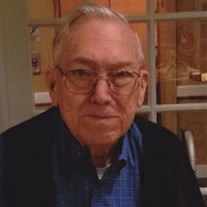 Stewart was born in Uniontown, PA on September 4, 1935, and carried the childhood nickname of "Tommy". He contracted polio at a young age after a fall, but was determined to live life on his own terms. He married Shirley Geigley in 1957 and became a sales manager and top grossing store manager for Remington Shavers. After living in Bethlehem and Harrisburg, PA, he and his family moved to Cleveland Heights in 1970, with the task of successfully turning around a failing branch store. Later in life, he expressed his love of animals by spending time as a volunteer for the Animal Protective League (APL) of Cleveland. Drawing on his extensive knowledge of car travel as a sales manager (and yearly family vacations) he went on to retire from his second career with the American Automobile Association (AAA) as a travel counselor. Stewart will be especially missed by his beloved 22 year old cat, Teddy.

The family prefers that those who wish make contributions in his name to The Cleveland Animal Protective League, 1729 Willey Ave., Cleveland, OH 44113.