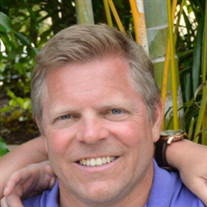 Steven Robert Sords died suddenly at his home in Kirtland Hills on May 22, 2017. Steve was the
son of Robert and Virginia Sords and grew up in Shaker Heights, along with his brother, Paul Andrew (Sharon) and sister Katy Mercer (Guy).

Home and family was always important to Steve. Living on Manchester Road, he graduated
from John Carroll University with a major in Russian History, but business was always in the back of his mind. In a course called Simulated Society Steve met the love of his life, Ann Evans. They were married when they were both just over 25, and subsequently became young parents of twins, Peter and Erik, and six years later, Sammy.

In 1985 Steve began working with his dad as a manufacturer's representative forAnderson-Bolds and had good success; he could sell anything, a product, an idea, or simply himself.
Never content to stand still, Steve went back to school, earning an Executive MBA at Case Western Reserve University, and then began a separate endeavor as a manufacturer of air conditioning equipment. He founded RSI Inc. in Cleveland which made Paulin Products, Typhoon, and finally Nesbitt Industrial Air Conditioners.

For recreation the sport of fishing was one of his favorites, both in the Florida Keys and at his
Canadian camp, Flatfish Island, where he loved to relax on the quiet lake and wait for the unexpected "strike". Over the years many friends have joined Steve and his family, Erik, Peter, Sammy, and Ann, on Flatfish Island, not only for a fish dinner, but for a gourmet "special treat". Our Steve was also responsible for taking care of the family farm in Kirtland Hills. Holidays and weekends he would welcome nephew Andrew Sords and Danny Singer, nieces Cece and Nikki Mercer from Ireland and Syracuse, and at Christmas you might find nieces Lizzie and Molly Sords from as far away as Boston and Portland, Oregon.

As home and family meant so much to Steve, the missing link of his absence will always be
sorely felt in our homes and in our family.

In lieu of flowers, the family prefers that those who wish may make contributions in his name to Glenbeigh Development, Serenity Trail Campaign, P.O. Box 298, 2863 State Route 45, Rock Creek, Ohio 44084.

A FUNERAL SERVICE WILL BE HELD WEDNESDAY, MAY 31ST AT 2 PM IN THE FEDERATED CHURCH OF CHAGRIN FALLS, 76 BELL STREET, CHAGRIN FALLS OH.

To order memorial trees or send flowers to the family in memory of Steven Sords, please visit our flower store.