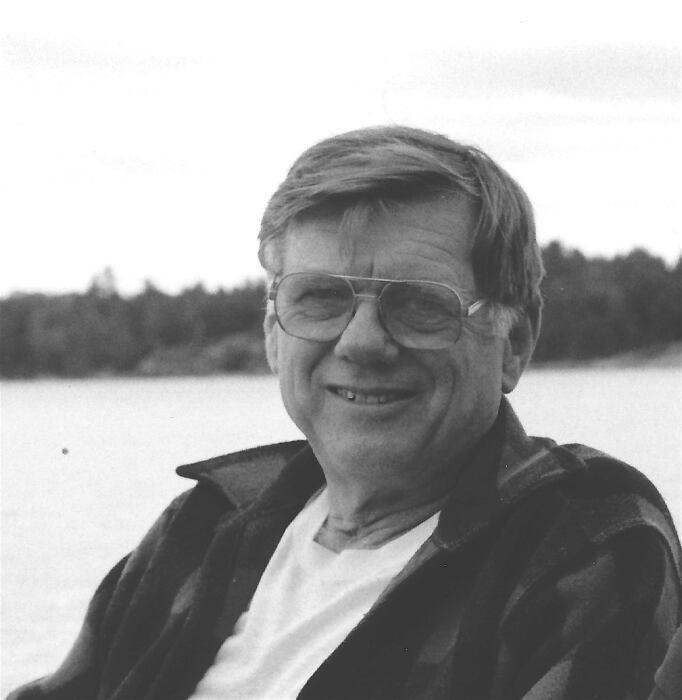 Sheldon K. (Pete) Towson passed away peacefully at the age of 93, surrounded by his family, at University Hospital on May 15, 2021.  For the past few years, he had enjoyed life at Judson Park in Cleveland, Ohio with his beloved wife of 69 years, Anne Towson. The majority of his life, including his childhood, was spent in Shaker Heights.  It was there that he and Anne raised four daughters, became grandparents and great grandparents, and where he continued to enjoy his many interests and pursuits well into retirement.

Pete's early years were spent at University School, where he excelled at academics, music and competitive swimming.  After spending time in the Navy (1945/1946), he entered Amherst College, graduating as a physics major in 1950.  It was during those years at Amherst that he met Anne Wofford, the love of his life.  Pete used to walk the seven miles each way between Amherst and Smith College, turning up unexpectedly at Anne's dorm.  This courtship technique got things started, and led to their marriage in 1952.  Pete graduated with an MBA from Harvard Business School that same spring.

Pete began his career working in industrial and labor relations at Allegheny Ludlum Steel Corporation in Pittsburgh, PA, where he and Anne made their first home and started their family.  They moved to Cleveland in 1956, where Pete served as vice president and then president of the Elwell-Parker Electric Company.  He ran the company for over 30 years, steering it through major changes within the industry. Ahead of its time, Elwell-Parker pioneered in the development of the first electric industrial trucks in the U.S. and continued to innovate within the industry under Pete’s leadership. The challenges of running a manufacturing company suited Pete's sharp, inquisitive, problem-solving mind, his steady calm temperament and innate leadership skills.

Pete was elected President of the U.S. Industrial Truck Association in both 1972 and 1990 and also served as the youngest elected President of the national Material Handling Institute during the era of its early expansion. He was actively involved in the Young Presidents Organization (YPO) of Cleveland, serving a term as its chairman, and maintaining those connections throughout his life. He also enjoyed serving on various boards throughout the Cleveland area, including the YMCA.

A gifted and avid piano player, Pete loved to be immersed in music, as well as to share that love with others.  His piano playing often provided the background to family evenings at their home, as well as during summers spent on Georgian Bay, Ontario, where he cherished the serene and beautiful landscape of the Great Lakes. Pete delighted in nurturing his family's love for the environment and teaching the younger generations to fish, swim, canoe and camp. Ever inventive, he loved designing and building things for the enjoyment of others, ranging from a cabin in the woods to a seasonal ice rink in the back yard, much to the delight of his children and the neighborhood kids.

Pete will always be remembered for his analytical and creative mind; his unerring patience and positive outlook on life; his aptitude for puzzles of all kinds; his steadfast generosity; his pursuit of philosophical conversations; his strong canoe stroke and vigorous stride; his enthusiasm for spy novels, martinis, operas and Cleveland's sports teams; his appreciation of maps and travel; his caring, quiet and kind nature; his dry and comical wit; his integrity; and his deep and devoted love for family and friends.

The family wishes to thank the staff at Judson Park and University Hospital for their compassionate care during Pete’s last years.

A private memorial service will be held for the family at St. Paul's Episcopal Church later this summer.

In lieu of flowers, the family prefers that those who wish may make contributions in his name to The Cleveland Orchestra Annual Fund, 11001 Euclid Ave., Cleveland, OH 44106 www.clevelandorchestra.com/give/ways-to-give/  or The Georgian Bay Land Trust, 120 Eglinton Ave. E. #1000, Toronto, ON M4P1E2, www.gblt.org/you-can-help/give-gift/.

To order memorial trees or send flowers to the family in memory of Sheldon "Pete" Towson, please visit our flower store.