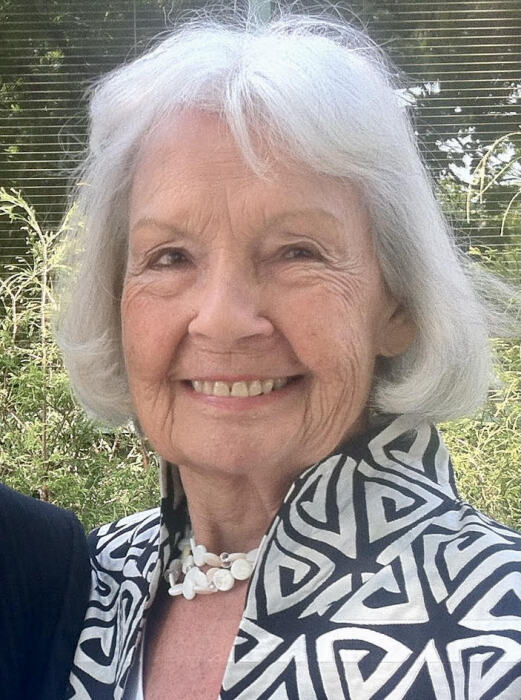 SARA “SALLY” STERLING RUBIN age 94 passed away peacefully on October 3, 2021 with family by her side. Born in St. Petersburg, FL on February 27, 1927 to Walter Adam and Katharine (nee Lindemann) Sterling. She was preceded in death by her older sister Jean Edith Sterling (1923-35) and her loving husband of 60 years Vaughn Potter Rubin. Sally is survived by her daughters Regina Rubin Cody (William F. Cody, Jr.) of Shaker Hts., OH and Amy Rubin (James L. Naremore) of Hudson, NY, and five adoring grandchildren: Alexander and Patrick Naremore, and Sara, Blake, and William Cody III.

Raised in Coleraine and Hibbing, Minnesota in the heart of the Iron Range, Sara Elizabeth Sterling was called Sally by her friends and family. In the great Northwoods she was known to climb trees with the boys, shoot and hunt with her father, play in the ore cars of the Sally Mine named for her by her engineer father, and ski behind cars on frozen roads and lakes. Attending boarding school at Kemper Hall in Kenosha, Wisconsin, she was a free spirit who studied hard and soaked up knowledge while testing the patience of the Catholic nuns. Smart, with a warm and magnetic charm, and always up for an adventure - Sally was a real catch! Her independence, pragmatic sensibility, and some have even said refined genius were forged in the Great Lakes heartland.

Embracing the classics, she applied curiosity and wonder to her studies at Wellesley College (’49) and exploration of Boston, enjoying lectures by the likes of Vladimir Nabokov and intimate courtyard piano concerts of her favorite Bach at the Isabella Stewart Gardner Museum. After a brief stint teaching English at the all-boys Fessendon School she traveled alone to Europe studying piano at Château de Fontainbleau School of Music & Art and painting at the renowned École des Beaux-Artes in Paris launching a lifetime of immersion in artistic expression.

Sally moved to Cleveland in the mid 1950s when her father joined Cleveland Cliffs and she had the honor of christening the Walter A. Sterling iron ore freighter in 1961. A ‘57 Thunderbird convertible that she owned for over 60 years was likely her “ride” to that event. Discovering the world of high fashion at Halle’s Bros. department store, she nurtured her talents by designing window displays and narrating fashion shows. Sally had an easy, classic sense of style and grace. Dresses were designed specifically for her by Bill Blass and Geoffrey Beene and she could wear an iconic Diane Von Furstenberg 1970s wrap animal print pantsuit like a Women’s Wear Daily model.

It was in Cleveland that Sally met Vaughn. They had both opted for travel and adventure before settling down to family life and joked about being the last ones left to marry! They got to know each other skiing in Aspen and it was love at first tracks - the dry powder and historic charm of another mining town! Honeymooning in the Alps was followed by spring breaks out West with their children and friends and a vacation home in Sun Valley, Idaho.

While raising a family with Vaughn, Sally continued her expressive exploration of painting and sculpture, taking classes at the Cleveland Institute of Art, welding sculptures at a local factory and studying Chinese watercolor with mentor Mitzi Lau. She loved the delicacy and unforgiving nature of the watercolor process - you can’t erase, but you can turn your mistakes into lovely unexpected treasures. As a perpetual student, in 1986 Sally enrolled in a semester-long class in Lacoste, France through the CIA, spending three months with daily walks to a quarry to sculpt, compose poetry, and paint plein air in the French Provence countryside. Her love of landscapes, particularly the arid and colorful hills of Sun Valley provided rich subject matter for her canvas, palette and brush well into her 80s with a retrospective exhibit of her Life’s Works in Painting at South Franklin Circle in 2018.

Involvement in the Junior League led to meeting many of Cleveland’s finest women who would become life-long friends and provided a solid foundation for volunteering all over town. She served on the boards of the Cleveland Institute of Art and Planned Parenthood and Sunbeam, volunteering at the Cleveland Museum of Art, Cleveland Orchestra among numerous other great organizations small and large. She belonged to the Intown Club, The 21st Century Club, and the Mundane Club. Service came naturally to Sally, always contributing to the greater good.

Her small frame and gracious demeanor rarely betrayed her heightened sensitivity to the big feelings of life, the beauty of nature, quiet faith in humanity, and sense of equanimity. Glamour balanced beautifully with Scotch thrift, scotch on the rocks, and a nearly Shaker simplicity. An early riser, she was routinely up while still dark to watch the gentle caress of the first light of day, silently marveling at the fleeting miracle of the day’s light emerging quietly into view.

She was genuinely nice to everyone she met - cultivating and sustaining her friendships through the decades. Sally was authentic, true to her humble small-town roots with unparalleled generosity of spirit. Remembered as “Sassy” and “Grammy” by her beloved grandkids - she touched the lives of many and holds a place deep in our hearts.

Private services will be held at Lake View Cemetery with a Memorial Reception in honor of both Sally and Vaughn at the Chagrin Valley Hunt Club on October 22nd from 5-8 pm. Please read the extended obituary online and share a memory. Memorial gifts may be made in Sally’s memory to the Cleveland Museum of Art, 11150 East Boulevard, Cleveland, OH  44106 or the Cleveland Institute of Art,11610 Euclid Ave, Cleveland, OH 44106.

To order memorial trees or send flowers to the family in memory of Sara "Sally" Rubin, please visit our flower store.