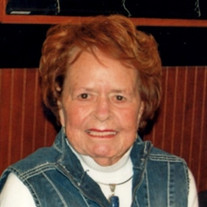 Sally was born August 3, 1931 in Cleveland Ohio. Her parents were Donald Winslow Horton and Florence Freeman Horton. She taught 1st grade after attending Center College and The University of Dayton to obtain her degree in Elementary Education. Sally was active in school musicals because of her dancing abilities and was a very avid cheerleader. She was very active in volunteering her entire life. For 30 years she organized a radio group that read the News weekly to the blind from The Cleveland Sight Center. She possessed a great speaking voice. She was also involved in Homecrafters, serving as their president, on the board of Visiting Nurse Association and Knollwood Cemetery.

She was a longtime member of Pine Lake, Rockwell Springs trout clubs, Mayfield Country Club and The Union Club. She was also president of the Ladies Association of Northwestern Mutual Life. Sally was an active, third generation member of Fairmount Presbyterian Church serving as both a Deacon and an ordained Elder. She also started the Young Couples Group at the church in the mid-1950s. She was instrumental in the remodeling of the church kitchen and was the cook there for over 12 years. She was also a Sunday school teacher for many years and modeled for the church fashion show.

Sally was a fun loving, energetic person that lived life to the fullest. She loved laughing, dancing, telling jokes and being where the fun was. Family and friends were most important to her. She had the ability to befriend anyone; she knew no strangers. She was a deeply caring person. She enjoyed reading, traveling and keeping busy with her husband Jim. She relished her time and travels spent with family on the Pine River, Mi., Vail, Co., Banner Elk, N.C., and Captive Is, Fl. Her travels also included several outdoor retreats and she was willing to push herself beyond her comfort zone including rafting trips on the Colorado River. More recently, she enjoyed meeting people at South Franklin Circle in the various activities she attended.

Family suggests donations be made to The Memorial Fund of Fairmount Presbyterian Church, 2757 Fairmount Blvd., Cleveland Heights, Ohio 44118. Services will be private and an open house Celebration of her life will take place at Mayfield Country Club, 1545 Sheridan Road, South Euclid, Ohio 44121 on Friday, May 27th, between 4pm-8pm.
To order memorial trees or send flowers to the family in memory of Sarah Bonebrake, please visit our flower store.