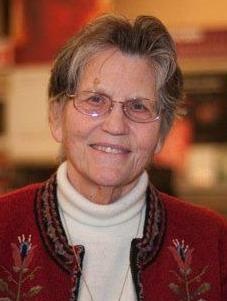 Sara (Sally) Laura Reed Brown was born June 16, 1936, to Josephine (nee Stewart) and Peter Reed.  The youngest of three children, she lived almost her entire life in Shaker Heights, having attended the Malvern Elementary and Hathaway Brown Schools.  Her only foray of living outside of Cleveland was to attend Vassar College, from which she graduated in 1958 with a dual degree in biology and zoology followed by a year in Boston.  Then she returned to Cleveland in 1959 to work as a social worker for adoptions.  Eventually, she found her calling in teaching, and received a master’s of education from Case Western Reserve University in 1975.

Hers was a life of deep curiosity, and she found a lifelong companion to share her interests in Edward R. Brown, whom she wed in 1961.  In the first year of their marriage, they chose to travel to the Soviet Union (including what is now Russia and Uzbekistan) and this was the first not only of countless adventures but a quest to understand the vast complexity of the world.  After their daughters were born (Rosalind Whiting Brown now Stewart in 1963 and Jocelyn Gayden Brown Hall in 1966), they continued their search for new ideas and interests by attending the Shakespeare and Shaw Theater Festivals in Canada, traveling to Europe with their daughters and supporting the Cleveland arts scenes.  Fearless and curious, they traveled as a family to visit Jocelyn in Peshawar, Pakistan when she was a Peace Corps volunteer in 1988, despite the raging Afghanistan war against the Soviet invasion.

Education was critical to Sally, and she brooked no impediment for her daughters, ensuring they had every possible opportunity.  Each of her daughters, for example, attended Phillips Exeter Academy, which had gone coed only 5 years before Rosalind commenced in 1978.  She was as fierce an advocate for her students to receive the best education she could offer.  In 1972, she started teaching at what is now the Betty and Lillian Ratner Day School, and she created a special class for gifted children with learning disabilities.  She would state that there was no child who could not learn; it was only a question of the teacher finding the right strategy.  Her individualized, hands-on approach turned children who had failed out of schools to academic achievers who went on to be medical doctors, researchers, renowned artists and lawyers.  She believed in her students, no matter what level or shape they presented themselves.  She retired in 1991, having grown her classroom size from a mere nine students to over 25.

After her retirement, Sally immersed herself in her newly-found art media, photography.  She and Ted toured the United States so she could attend lectures by some of the world’s most famous photographers of the time.  They learned quickly that Las Vegas was an inexpensive place to tour if one did not gamble! Sally entered a number of her photographs into local competitions, such as the Garden Club, where she won top prizes.  Determined in her quest for the best shot, she would join other Clevelanders in special “shooting” sessions at the Botanical Gardens and Cleveland’s famous industrial bridges.

Of all things worldly, however, music was Sally’s favorite.  She and Ted were huge sponsors of the classical musical community.  For over a decade, the couple organized the Charioteers for the Cleveland International Piano Competition, shuttling aspiring pianists to and from their host families and University Circle to practice and perform. They were also heavily engaged with Cleveland’s Artsong Festival.  Sally served on the board of what was then the nascent Apollo’s Fire to ensure its success, and of course was a subscriber to the Cleveland Orchestra, Lyric Opera and Oberlin and many other musical events.  Her final gift to Cleveland’s musical community before her death was of her Erik Hertz double-manual harpsichord to Case Western Reserve University’s School of Music.

Sally is survived by her daughters, Jocelyn Brown Hall (Richard Hall), who works for the United Nations in Ghana, and Rosalind Stewart (Ian) of London, England; and six grandchildren, in order of age:  Alistair Stewart, a lieutenant in the British Army; Amelia Stewart, who is double majoring in French and Portugese at Oxford University; Miranda Hall, who finished her sophomore year at Tulane University and is studying Sociology with a focus on Urban Studies; Lydia Stewart, who is in her second year at Nottingham University and is reading Art History; Christian Hall, who is a senior at Phillips Exeter Academy in June 2021 and will matriculate at the College of William and Mary in the fall of 2021; and his twin brother Nathaniel Hall, who will also graduate from Phillips Exeter Academy in June 2021 and attend Case Western Reserve University in the fall of 2021.

A memorial service will be held for Sally Brown on Sunday August 8th at 12:30 at Trinity Cathedral, Cleveland.