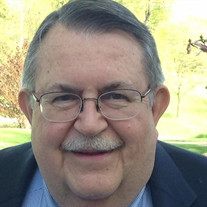 Samuel Richard "Dick" Petry, II passed away on Tuesday, September 5, 2017, and is now at peace with the Lord. He was a long-time resident of Pepper Pike, Ohio. Born on November 18, 1942, in Dennison, Ohio, in Tuscarawas County, Dick was the son of the late Samuel Richard Petry and Theodora Arline Petry (Underwood). He is survived by his son, Samuel Colin George Petry and his daughter-in-law, Lindsey Elizabeth Petry (Benedict) of Washington, D.C., and his former wife, Vondell Petry, of Cleveland Heights, Ohio. He was preceded in death by his beloved parents and brother, Mel Petry, all formerly of Uhrichsville, Ohio.

Before retiring, Dick was a loyal employee of Eaton Corporation for 37 years, and was responsible for general law outside of the United States as Senior Counsel-International. During that time he saw tremendous growth and developments at Eaton and in the world, including the fall of the Soviet Union and its impact on global business. A high point early in his career with Eaton was the five years he spent in London at Eaton's then headquarters for Europe/Mid-East and Africa where he managed Eaton's legal function in that region and had the opportunity to travel throughout Europe. Dick was also a corporate lawyer at The White Motor Company for three years following his graduation from law school.

Dick was a long-time member of Church of the Saviour, United Methodist, in Cleveland Heights, Ohio, where he taught Sunday School and was a Cub Scout Den Leader during his son's younger years.

Dick was a Charter Member, Officer and a Director of The Greater Cleveland International Lawyers Group for 30 years, a Board of Advisors member/Trustee of The Canada-U.S. Law Institute for over ten years, and a Board Member of The British-American Chamber of Commerce Ohio for over ten years. He also previously served as a Director of The Golden Age Centers of Greater Cleveland, Inc. off and on for over 25 years, and was President of the Board for two terms.

Dick was an avid gardener, fisherman, and amateur farmer. He liked to play in his small dwarf fruit tree orchard and grow corn in his fenced garden (that is neither raccoon nor deer proof). He was also a life-long Anglophile and Cleveland Indians fan.

Most importantly, Dick was an exceptionally loving and devoted father, kind and generous man, and wise counsel to many.

To order memorial trees or send flowers to the family in memory of Samuel Petry, please visit our flower store.