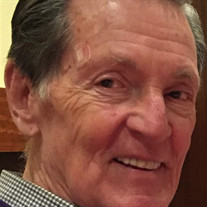 Samuel Whittome Hughes, age 84 of Gates Mills, OH, died peacefully surrounded by family on July 10, 2017. He was born on July 27, 1932 to Earl W. and Marian C. Hughes as their only child. Sam attended University School, Williams College and got his MBA from Case Western Reserve University. He passed his CPA exam shortly thereafter. He was a pilot (1st Lieutenant) in the USAF for nearly 3 years beginning in 1955. He was a CPA and later a consultant at Arthur Anderson. He dedicated his time and services as a USGA official for the Jr. Amateur golf programs both local and nationally. Sam was a Cleveland native who enjoyed watching all sports but especially his grandchildren's endeavors from grade school through their college years.