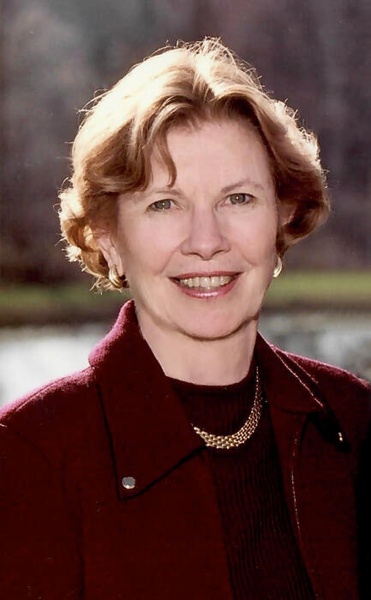 Sally Stecher Hollington, born in Lakewood, Ohio on September 2, 1932, passed away on August 15, 2021, surrounded by her adoring family. She was an extraordinary woman who lived a remarkable life and will be deeply missed by her family, friends, and community.

She attended Hathaway Brown School and then Connecticut College where she majored in art history.  Upon graduation, she moved to Boston to begin a career in market research working for Arthur D. Little. Later, she would work for American Greetings Corporation in Cleveland.

In Boston, she became reacquainted with Dick Hollington, an old Cleveland friend from University School who was then a Harvard Law Student.  The relationship blossomed and the rest, as they say, is history. Happily married for over 62 years, Sally and Dick shared a special bond as parents, partners, and best friends. She supported him in every way but never let him get away with a thing, especially when it came to politics, current events, and his wardrobe.

As mother to four children, born within five years, Sally guided her busy and active family with unbelievable energy, love, and support. She could be found on the Little League baseball fields keeping score as Dick coached, in Roaring Gap, NC competing in the mountain Olympics, and even in the wilds of Canada with a paddle and a smile.   She provided a gentle and guiding hand to both her children and their friends as they navigated through childhood and the teen years. As the children turned into adults, her role changed into one of trusted advisor, lead cheerleader, and, of course, friend.

Sally had many passions beginning with family and friends. In addition to maintaining close bonds with the Stecher Family, Sally was the matriarch of the Hollington “Outlaws,” where she welcomed each new member to the family with open arms and provided them the encouragement needed to navigate the sometimes-lively Hollington Family. She was a beacon who gathered family and friends wherever she lived, from Lakewood, Shaker Heights, and Hunting Valley to Roaring Gap, NC, and Brays Island, SC.  She always provided a refuge for anyone who needed a soft landing.

Beloved “Ganny” built an irreplaceable bond with each of her ten grandchildren. Every grandchild adored her, cherished their individual relationship with her, and will forever remember “stepping into her office” for wisdom, love, and support.

Sally left the world a better place.  She made an indelible impact on several community organizations.  Most notably, she served for decades as a trustee of Hathaway Brown School, chaired the Board from 1994 to 1997, was named a life trustee in 2000, and received the Distinguished Alumnae Award in 2002.  Her work at HB was transformational.  As Chair of the Building and Grounds Committee in the early 2000’s, she oversaw the construction of the then-new and still impressive middle school, the Jewett-Brown Academic Center.  Later, she spearheaded the IDEA Invention Lab, and was a supporter of the ASPIRE program, providing disadvantaged middle school girls an opportunity for an exceptional educational experience. Sally was thrilled that her two daughters, two granddaughters, and countless nieces followed in her footsteps at HB.

Her community service did not end with HB. Sally served on numerous boards over the years, including the Cleveland Institute of Art, the MetroHealth System, the MetroHealth Foundation, Saint Luke’s Medical Center, Saint Luke’s Foundation, and the Fund for our Economic Future. In the 1970s, she ran one of the early auctions to support WVIZ, a new public television station in Cleveland.

Sally was an entrepreneur. As a licensed realtor with Hackett & Arnold, Sally, and her lifelong friend, Libby Biggar, ran Phoenix Design, renovating and selling houses for 12 years.  She invested in, and helped manage, Al Friedman Inc., a men’s clothing company, and Time and Weather, Inc., owner of Ohio Bell’s old weather phone number.  She was also an investor in several movies, including the “blockbuster” Executive Action.

Through all her accolades, accomplishments, and time spent raising her family, Sally still found time to pursue her artistic passions. She could often be found in Chagrin Falls at Wheel Works Art Studio working with Tracy to create her many wonderful pots.  She shared her passion for pottery with all her grandchildren and never missed an opportunity to take them for a visit to throw and glaze their own creations. Now, we are blessed to have her pottery creations in all our homes.

Sally successfully battled cancer in the 1960s and again in the 2000s.  She never complained, did what needed to be done, and successfully beat back cancer despite its best attempts to take her life.

Sally will be deeply missed by the many people whose lives she touched, but by none more than her loving family.  We will cherish her in our hearts forever.

For those who wish to make donations in her memory, the family suggests Hathaway Brown School, 19600 North Park Blvd., Shaker Hts., OH 44122, or The Cleveland Institute of Art, 11610 Euclid Ave., Cleveland, OH 44106, or any organization of your choice.