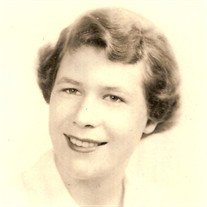 Sabra Qua (nee Hansen), age 83, died on May 31, 2017, at her home, after a prolonged illness. Sabra was born on October 4, 1933 in Columbia Hospital for Women in Washington, D.C. Her husband, George Franklin Qua II, was also born there. Her parents were Paul William and Ruth Williams Hansen. Paul was the oldest of nine children and the son of Mette and Alfred Hansen, a rancher in southeastern Idaho. They were stalwart members of the Church of Jesus Christ of Latter Day Saints. Ruth Hansen was born in Louisville, Illinois. Her parents were Mabel Simpson and Thomas Sutler Williams. Thomas Williams practiced law and owned the Clay County Republican newspaper in Louisville, Illinois. He was elected to the United States House of Representatives in 1912 and served on the Republican side of the aisle until 1929 when President Herbert Hoover nominated him to be a judge on the U. S. Court of Claims. He served there until his death in 1940. A friend said, "It's a long way from Hord (where he was born) to the U.S. House of Representatives and not many people make it."

Sabra's father, Paul William Hansen, was the oldest of nine children born in a one room log cabin. He drove a sleigh to school during the frigid winter months and often slept outside with the cattle when temperatures plummeted to 65 degrees below zero. He graduated from National Law School, which is now George Washington University Law School. Eventually, Paul went to work for the FBI where he arrested two Public Enemies Number One in a single weekend and also captured Machine Gun Kelly. He completed his career by serving as the Security Director for Reynolds Aluminum. However, he felt his greatest achievement was founding the American Society for Industrial Security in 1955. Sabra's mother, Ruth Williams Hansen, graduated first in her class from George Washington University, and was on the Grand Council (Executive Board) of Pi Beta Phi Fraternity and was a proud member of the Daughters of the American Revolution. In addition, she was a very knowledgeable botanist and ornithologist.

Sabra matriculated from Atherton high school in 1951 and enrolled at the University of Louisville. She graduated from DePauw University in Greencastle, Indiana in 1955. She taught English for a year in Gatlinburg, Tennessee for $2200 then moved to Cleveland where she taught English, American History, American Government, and Sex Education for three years at Euclid High School. She met her future husband George at his automobile dealership when she went in to buy a car. A year later, they were married. George's father owned Qua Buick and his maternal grandfather was Secretary/Treasurer of the University of Michigan.

Sabra was a sixty year member of Plymouth Church of Shaker Heights where she served on the Board of Trustees, Council of Deacons and as a Stephen Minister. She was also on the Women's Committee of The Music School Settlement. She was a Golden Arrow member of Pi Beta Phi Fraternity, serving as President of the Cleveland East Alumnae Club and as Alumnae Province Vice President. She was also on the Pi Beta Phi Settlement School Board in Gatlinburg, Tennessee. Sabra was a charter member of the Northeast Ohio Crohns & Colitis Chapter in She was a good neighbor and a good friend to many.

Sabra and George travelled the world and went on many exciting trips. They rode a camel in Egypt, an elephant in Nepal, and circled Mt. Everest in a plane. They also SCUBA dived in Mexico, ate exotic food in China, travelled by ship to Alaska and have travelled to all fifty states.

The family wishes to thank the wonderful people from Homewatch CareGivers Beachwood, Grace Hospice, and Unit J83 of the Cleveland Clinic.

Sabra will be memorialized at Plymouth Church of Shaker Heights, 2860 Coventry Road, on Saturday, June 10, 2017 at 1:00 p.m. There will be a reception at the church following the service. Burial will be in Arlington National Cemetery at a later date.