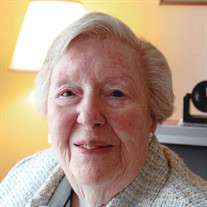 Dunn, Ruth Elizabeth (nee Richards), beloved wife of The late Donald D. Dunn, who passed away in 1994, and of the late Henry B. Fields, who passed away in 1961, had a lifelong interest in art and painting. Born on March 9, 1912 in Cleveland, Ohio, she graduated from Cleveland Heights High School in 1930. She attended the Cleveland Institute of Art from 1930-1933, where she was a member of Beta Gamma Sorority and subsequently graduated from Pratt Institute in Brooklyn, NY in 1934 with a degree in Advertising Design.

She was a Layout Artist at Park Wolaver and Hains Studio for 9 years and also for Robert Koons Advertising. She taught "Sketching" for 7 years with the Adult Education Department of the Shaker Heights Recreation Department and was an active member of the Hillcrest Art Guild from 1994-2006 working in watercolor.

She was a resident of Brookdale at Rockefeller Gardens from 2004-2016 where she also taught sketching and was dearly beloved by the community. She continued to paint watercolors in her later years, both landscapes and still lifes, which many of her friends will continue to treasure in their own homes. After a long life filled with faith and love, she passed away peacefully in her sleep on August 26, 2016.

Dear sister of the late Dr. Charles E. Richards of Quincy, Illinois. She is survived by her son Dr. Scott C. Fields (Professor Emeritus of English at Norwich University, Northfield, Vermont), and daughter, Susan E. Fields of Congers, New York, whose work in graphic design has always been influenced by her mother. Her children continue to be inspired by their mother's love of art, the sea, sky, clouds and ever changing light.

She was an active and longtime member (1925-2016) of Plymouth Church of Shaker Heights where a Memorial Service in celebration of her life will be held on October 15, 2016 at 11 AM.

RUTH R. DUNN (nee Richards) The beloved wife of the late Donald D. Dunn and the late Henry B. Fields; dear daughter of the late Charles E. and Helen S. Richards; dear mother of Scott C. Fields, PhD of Northfield, VT and Susan E. Fields of Congers, NY and dear sister of the late Dr. Charles E. Richards. The family prefers that those who wish may make contributions in her name to Plymouth Church, 2860 Coventry Rd., Shaker Hts., OH 44120, where Memorial Services will be held Saturday, October 15th at 11 AM. A private family interment will be held in Lake View Cemetery.