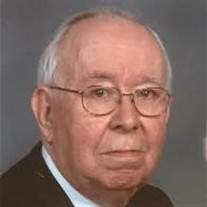 Russell G. Bean, age 95, of Cleveland, OH, formerly of Saratoga, NC, passed away on Friday, August 25th, 2017. Born December 15, 1922 in Cochranton, PA, he was the son of John Bean and Maude McCracken Bean. Following High School he attended Grove City College and later Michigan State College at E. Lansing, MI. He enlisted in the US Army and served in WWII.

His life's work involved the automobile claims business with several companies. The main and longest one was State Farm Insurance from which he retired on December 31, 1981. Mr. Bean was a member of the Masonic Lodge in Meadville, PA, and a 32° member of the Consistory in New Castle, PA. Mr. Bean and his surviving wife, Vera Scofield Bean, have been long time members of the First Baptist Church in Wilson, NC. He was the dear father of Deborah B. Snyder of suburban Des Moines, IA, and Ronald P. Bean of Shaker Heights, OH. He is also survived by his grandsons, Timothy R. and John R. Snyder. There are also several nieces and nephews.