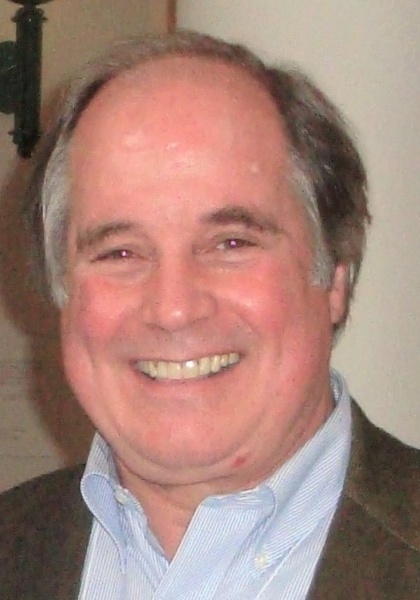 R. Robertson Hilton (11/14/50—1/30/21), a former international banker, noted Cleveland philanthropist and the retired CEO and President of the A. M. McGregor Foundation, passed away unexpectedly in Charlottesville, Va. on January 30.  He was a man of ideas and ideals who committed himself to furthering causes such as neighborhood nutrition and successful aging.

Rob’s professional career combined his many interests.  After obtaining his M.B.A. in International Finance from the University of Chicago in 1974, Rob joined the First National Bank of Chicago. He married his wife Dale Kocen Hilton in 1976. They were transferred by the bank to Tokyo and developed an enduring appreciation of Japanese art and culture. In Tokyo Rob studied the Japanese language intensively, became a sumo fan and learned how to wheel throw and hand build pottery.

After returning to the States in 1982, the family settled in Evanston, IL and later Cleveland Heights, Ohio, where Rob continued his career with First Chicago, opening a Cleveland office. He served in other corporate financial positions with NACCO Industries Inc and Key Bank. However, Rob eventually found his calling in community work, arising from years as a board member of the A.M. McGregor Home, a not-for-profit direct provider of residential care. He joined the organization in 2001 as CEO and was instrumental in establishing the McGregor Foundation to “support seniors in need and those who serve them.” Over the years Hilton and his colleagues grew the institution into The A.M. McGregor Group comprising The McGregor Foundation, The A.M. McGregor Home, and McGregor PACE (Program of the All-inclusive Care for the Elderly (PACE)).

In 2005 Rob received his Doctor of Management Degree from the Weatherhead School of Management at Case Western Reserve University in Cleveland, where his research project was titled, “Strangers in the Commons: Understanding and Measuring Successful Aging for Low-Income Seniors in Affordable Housing.”  After receiving his doctoral degree, he continued to be involved at the Weatherhead School in teaching and mentoring roles.

Dr. Hilton served on the Boards of many community-based and nonprofit organizations.  He served as Chairman of the Board of Directors of the International Association of Homes and Services for Aging (IAHSA) in 2012-2013. In addition, he held Board positions with Green City Growers of Cleveland, The Evergreen Cooperative, Cleveland Decorative Arts, The American Association of Service Coordinators and Grantmakers in Aging, which recently named him as an honorary life trustee.

Dr. Hilton enjoyed collecting American and English pottery, engaging in architectural and historical preservation projects, cooking for friends and reading. He was a member of Cleveland’s bibliographic society: The Rowfant Club.  His decades-long involvement in Fairmount Presbyterian Church included roles as Clerk of Session, Elder, Trustee and Sunday Greeter.  Rob had recently begun new preservation projects at a historic cottage in Barboursville, VA, where he had settled with his wife Dale.

Rob was born in Boston and spent his early years in Cambridge, Massachusetts and Pittsburg, PA, where his father was on the faculty of Carnegie Mellon University. The family relocated to Princeton, N.J. in 1962. After graduating from Princeton High School, Rob attended Wesleyan University in Middletown, CT, studying Architecture and American History, deep interests he pursued in his many travels over the years.

Rob was preceded in death by his parents. Dr. Thomas L Hilton and Alice Robertson Hilton, and his beloved son James Robertson Hilton, who died in 2010. Survivors include his adoring wife of 44 years, Dale Kocen Hilton, and his brothers William Hilton and Thomas L. Hilton Jr. Rob leaves behind scores of loving friends who describe him as a gem, a treasured mentor, colleague and a man of intelligence, humility and deep reflection.  A family service and tribute to Rob will be held Friday, April 30th at 12 noon in Fairmount Presbyterian Church and will be live streamed for the public.  You may access the live stream by clicking on the link below.   Should friends desire, contributions may be sent to  the A.M. McGregor Foundation, R. Robertson Hilton Memorial, 14900 Private Drive, East Cleveland, Ohio, 44112 or at https://mcgregoramasa.org/help-support-our-legacy

Due to technical issues, the event failed to live stream.  However, the service was recorded and will be uploaded to this webpage before 5pm, April 30, 2021.