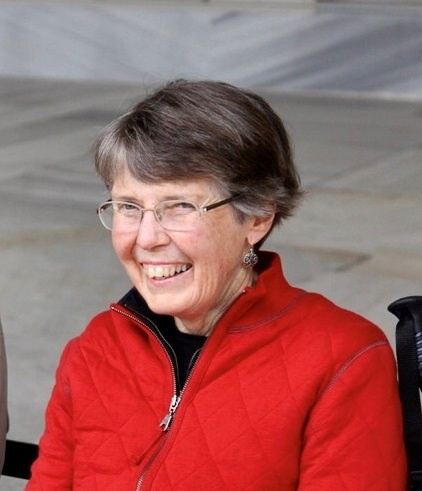 Born on December 7, 1937 in Cleveland, Ohio, Rosemary was the second of Patrick J. and Louise O. Prendergast’s five children. The first 10 years of her life were spent in Cleveland Heights. Even though her given name was Rose with a middle name of Mary, she was always called Rosemary. After a battle with Sister Robert, her first grade teacher, Rosemary permanently changed her name to one word and she was known as Rosemary ever since.

Inspired by her father’s love for the game, Rosemary became an avid Cleveland Indians fan.  Her close proximity to Municipal Stadium as well as living near the famous Lou Boudreau, shortstop and player manager, meant she had a front row seat to the Cleveland Indians run to the successful 1947 World Series. She remained a hopeful and dedicated Cleveland fan, celebrating their wins and sharing her love of sports with her children and grandchildren.

When Rosemary was 10, her family moved to 401 South Chestnut Street in Ravenna to live in a home built by her grandfather. Rosemary’s mother was born and raised in Ravenna and this was truly a move “home”. Rosemary loved growing up in a small town where everyone knew her and she had a true feeling of belonging. For many years to come, the Chestnut Street house became the place for family gatherings including holidays and frequent Sunday dinners with her siblings and their growing families.

Rosemary was a passionate reader who went to the library weekly to borrow a stack of books, read the entire stack during the week and return the following Monday for the next stack. Though she grew up in a small town, Rosemary always said she first traveled the world through the books she read. She was a supporter of the public library system her entire life and participated in numerous book clubs. Her list of books that she read was used by her daughters’ book clubs. She truly embodied the description of a lifelong learner.  Always reading, attending lectures and traveling to expand her world view.

She graduated from Ravenna High School and had yearly gatherings with friends from Ravenna throughout her life. These women provided a supportive network and connection to her roots. Attending college was a major goal for her and she enrolled at Kent State University. Originally she wanted to major in math, but second semester freshman year decided to become an English teacher and found her true calling. Because she was funding her education, she found a summer job in Lake Placid, New York where she traveled with some of her Chi Omega sorority sisters. She was a hostess at the Howard Johnson‘s and it was there she met Charles (Chuck) Merchant, a busboy and the love of her life. They maintained a long distance relationship by writing letters between Ravenna, Ohio and Albany, New York for 2 years before Chuck moved to Cleveland to finish his law degree at Western Reserve University. They were married on December 31, 1960 at Immaculate Conception Church in Ravenna.

After the birth of their son, Matthew, Rosemary and Chuck moved to Shaker Heights, a city they would call home for over 30 years. As a very accomplished homemaker, Rosemary created a warm and welcoming home where they raised four children and made many lifelong friendships with neighbors on Avalon and Southington Roads. She loved to entertain and often organized dinners for both families and friends in our home. These gatherings were always full of good food, drinks and laughter. Rosemary had an open door policy and many evenings, encouraged her childrens’ friends to join the family at the dinner table and enjoy the warmth of the home they had created.

Rosemary and Chuck selected Shaker Heights to raise their family in part due to the reputation of the Shaker Heights Schools. Public education and access to learn for all students was a guiding mission in her work as an English teacher at Shaker Heights High School, a parent of students in the schools and an active PTO member who used her time to make sure all students were supported in their educational journeys. One of the ways Rosemary brought the literature she taught to life for her students was by dressing up as Medusa and Mrs. Havisham on Halloween. The members of the English Department at Shaker High stimulated her active mind and she enjoyed working with a group of such talented and dedicated teachers. Rosemary believed that education opened opportunities for her students and wanted to help them achieve their potential.

Her faith was a central part to Rosemary’s life. She was guided by the Peace Prayer of Saint Francis and she strove to bring peace and comfort to those she met. At the Church of St. Dominic, Rosemary found a religious home where she could focus her faith into service.  She faithfully attended the 9 am Sunday mass, sitting three rows back on Mary’s side and developed a close relationship with the church “neighbors” who shared the pew with her family. She had a heart for service and the St. Dominic church community provided countless opportunities for her to put her talents to God’s service. She served on the Saint Vincent De Paul Society, spent time with children at the Thea Bowman Center, organized gifts for the annual giving tree, made meals at St. John’s Cathedral, served as a Eucharistic minister and fulfilled countless other roles.

Rosemary was a wonderful mother, who treasured the opportunity to be the grandmother to 11 grandchildren. She attended the births of many of her grandchildren and was never happier than when she had a baby in her arms. Once the grandchildren were born, Rosemary and Chuck took the opportunity to travel to New Jersey, Atlanta, Thousand Oaks, Connecticut, Munich, Breda and back to Shaker Heights, spending as much time as possible with their childrens’ families. She attended baptisms, school performances, first communions, sporting events, musical performances and graduations with a bright smile and love and enthusiasm for her grandkids.

Rosemary loved to work with her hands whether it was cooking, sewing, gardening, knitting, or quilting. She always created a room for herself to work - either in the basement on Avalon Road where she had a plexiglass window to the playroom to watch her children or the sun room on Southington Road. She was eager to share these skills with her children and grandchildren. Even during annual family road trips she took her knitting bag to finish her latest project in the car. Watching movies was another favorite pastime - as a child she would use her pocket money and go to the movie theater Friday afternoons, sometimes she was able to watch the same movie twice for the price of one movie. Later, she and Chuck enjoyed Friday evening date nights at the movies.

Wherever they lived they made lifelong friends with neighbors who shared similar hobbies and interests. These ranged from fishing, which led to family trips to Devil’s Elbow Lodge in Canada, to walking with the group of Ten who even walked together in Europe and Mexico, to attending concerts at various venues.

Traveling with Rosemary was always a fantastic experience. After much preparation, she greeted each day eager to experience the adventures that awaited. She talked to cooks, shopkeepers, tailors and anyone else she met to understand what they did and made friends wherever she traveled in the world.

After years of spending summers renting at Lake Chautauqua, in 1993, Rosemary and Chuck purchased their dream vacation home on the lake. They renovated it to make it their own home and hosted friends and families for years. The gardens are full of daylilies carefully selected from nurseries around Chautauqua, the home is filled with antiques that she loved to find and the kitchen is stocked to prepare food for all who come to stay.  Rosemary used to say that after two nights, you were no longer a guest and you should make yourself at home.

Chautauqua, and their neighbors at Cheney’s Point, were part of a wonderful retirement for Chuck and Rosemary. Rosemary would knit or read a book on the “Fish n’ Fun” boat while Chuck tried to catch walleye and the elusive muskellunge. The summer calendar, posted on the fridge, was always full of visitors from Memorial Day to Labor Day. Their 11 grandchildren all grew up at the lake and passed milestones there surrounded by love from their doting grandparents.

The loss of her son, Matthew, in 2015, was a heartbreak from which she never truly recovered. We are all comforted in knowing that Rosemary, Chuck and Matthew are reunited in peace. Rosemary will be greatly missed by her family and they will cherish future family reunions and visits to the Lake house knowing that she is with them in spirit.

The family wishes to thank all those who supported Rosemary in her final years by visiting, praying for her and sending letters of encouragement.

The family also sincerely thanks the staff at Judson Park Reinberger Court and the Hospice of the Western Reserve for their compassionate care of Rosemary as she struggled in her later years. She was supported and cared for by a loving and skilled team.

The family prefers that those who wish may make contributions in her name to the "Legacy Fund" of The Shaker Schools Foundation, 15600 Parkland Dr., Shaker Hts., OH 44120, https://shakerschoolsfoundation.org/donation-form/ or to the Michael J. Fox Foundation for Parkinson's Research, www.michaeljfox.org . A private family Mass of Christian Burial will be held in the Church of St. Dominic (Shaker Hts.) on Saturday, September 19 at 10:00 am. Friends may view the mass and the graveside service virtually by clicking the link below the service details on this webpage . Interment, St. Mary's Cemetery, Ravenna, OH.