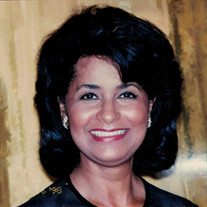 Beloved daughter, sister, mother, aunt, grand-aunt, Rosalind Ann Minter Edwards, age 77, transitioned on July 26, 2018 in Cleveland, Ohio. The cause was of death was amyotrophic lateral sclerosis (ALS). ALS is a progressive neurodegenerative disease that affects nerve cells in the brain and spinal cord.

Rosalind was born on January 6, 1941 in Akron, Ohio to Lawrence & Dorothy Minter. She was the second eldest of eight children and spent her childhood in Northeastern Ohio. Most of her high school years were spent in Kinsman, OH, though she graduated from Windham High School in 1959. One of the outfits she designed while a high school student in Kinsman, inspired the cheerleading uniforms for the following basketball season. Rosalind became an excellent seamstress and would later make her high school graduation dress and fashion forward attire for her senior trip to Washington, D.C.

In the fall of 1959, Rosalind enrolled at Baldwin Wallace College. While there, she met Oliver Edwards of Cleveland, a student at John Carroll University and they would marry in 1961. A daughter, Loretta ("Lori") Suzanne Edwards was born to this union. Rosalind was an attentive mother and found great joy in raising Lori. She volunteered at Lori's schools and loved attending Lori's choir concerts and dance recitals. Through the years, Rosalind often reflected with pride on Lori's academic and professional accomplishments, including Lori's current success running a Human Resources consulting business.

While being a wife and mother, Rosalind was able to work as a professional model, and her photographs often graced the pages of local magazines and newspapers. After a relatively successful modeling career, she continued her work at the Cleveland Plain Dealer in the Circulation Department prior to joining the Shaker Heights Housing Office. Though part-time, she valued her service to the Shaker Heights Housing Office where she was a part of a special program that steered prospective buyers by race to different neighborhoods to promote integration in the community.

Later, she would go on to manage Lexington Village, a new development in Cleveland, Ohio's historic Hough Neighborhood, where she served as Property Manager. Her management style was so efficient & effective, that the developers, McCormack Barron, utilized her services by having her manage many of their properties around the country. This success led to her relocation to Chicago, Illinois, where she obtained of a real estate license allowing her to broker multi-million-dollar real estate deals for The Shaw Company. Upon her arrival in Chicago, Rosalind was warmly and graciously welcomed by her beloved "Uncle" Harold Abrams and his wife Gwen. Uncle Harold spent major holidays with Rosalind when she was not traveling to Texas and he looked after his niece daily, throughout her years in the Windy City. Rosalind blossomed in Chicago and made life-long friends with whom she would later travel with internationally.

Upon retirement, Rosalind relocated to metropolitan Atlanta, to be with her beloved sister, Rosemary, brother-in-law, William, niece, Angela and grand-nephew, Matthew. It was quite easy for Rosalind to become the consummate southern belle and live up to the moniker "Miss Ann" with her many friends and social engagements. Although her sister Rosemary is Matthew's grandmother, Rosalind was also his surrogate grandmother. For over a decade, Rosalind helped teach Matthew to read, appreciate nature & history through local hikes and excursions throughout Northern Georgia, overcome his fear of water, by having him swim at her complex's pool, and most importantly how to appreciate fine dining, a la "Downton Abby".

Rosalind never missed any school or extracurricular event in Matthew's social calendar. Family was important to Rosalind. Family came first. Rosalind attended several of her niece Angela's personal and professional library affiliated events, supported Angela in her business endeavors and always hosted and welcomed visiting family members and friends in her home. For those eleven years, her home was the "vacation destination" for sister Rosemary where they shared many "girls-nights" and sleepovers complete with 5-star service and shopping excursions.

After more than a decade in Atlanta, Rosalind and her sister, Rosemary's family moved back 'home' to Shaker Heights, Ohio in 2017. She would be closer to old friends and her treasured brothers and their families. She was also able to rejoin The Cleveland Chapter of Carrousels and renew connections with many of her sisters.

A memorial service will be held on Saturday, August 11, 2018 at 11:00 AM at Fairmount Presbyterian Church Chapel, 2757 Fairmount Boulevard, Cleveland Heights, OH 44118. A reception and luncheon will follow. All are welcome to attend and celebrate Rosalind's life.


Please click here to view the video tribute
To order memorial trees or send flowers to the family in memory of Rosalind Edwards, please visit our flower store.