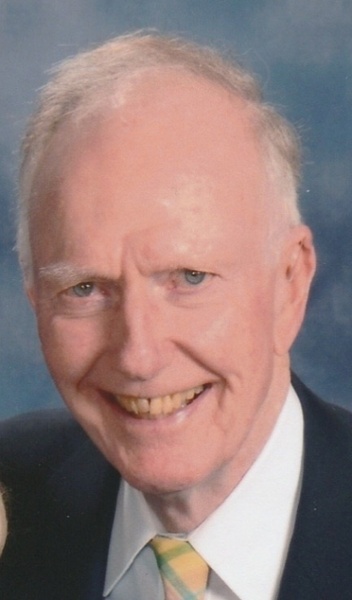 Bob grew up in Hancock in the Upper Peninsula of Michigan, and graduated in Civil Engineering from Michigan Tech where he was president of student government. He earned an MBA from Stanford University. Beginning as a bank teller at Palo Alto Savings (CA), he moved on to become VP of First Western Savings (Las Vegas NV), Sr. VP of The Federal Home Loan Bank of Cincinnati, and retired as CEO of Cardinal Federal Savings Bank (Cleveland).

Bob was committed to civic leadership, including the Orange Senior Center, United Way, Clean-Land, Ohio, Planned Giving Systems, Inc., Leadership Cleveland, Lutheran Housing Corporation, Northeast Ohio Council on Higher Education, and as a Trustee, Elder, or Clerk of Session at his various churches around the country. Over the years he was active in the Union Club, The Country Club, Mentor Harbor Yacht Club, and Mayfield Village Racquet Club.

Serving as a Naval Officer at the Pentagon during the Korean War, Bob retired from the Naval Reserve after 20 years. He loved to sail, travel, read, golf, and play tennis. The Seatons lived in Pepper Pike for 43 years, and for the last 4 years at Breckenridge Village in Willoughby.