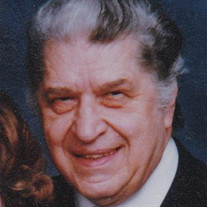 Robert C. Smith, age 94, of Elyria, Ohio, was originally from Pittsburgh, PA. There he attended Langley High School and graduated from Carnegie Tech (Carnegie Mellon University) with a BFA in Music in 1949, as well as a BFA in Music Education and an MFA in Musicology in 1950. He served in WWII as a pilot and flying instructor, training bomber pilots in the Army Air Corps, attaining the rank of 2nd Lieutenant.

His post-war career life included ticket agent for TWA, teaching in Ohio public schools, and positions at IBM and at their customer's locations in data processing, and the Department of Defense. Post retirement, he was active in the Cleveland Philharmonic Orchestra, playing the cello and violin as well as conducting. He and his wife enjoyed travel and genealogy studies.

He was preceded in death by his wife, Maryel Vogel Smith, his parents, Henry C. and Marian L. Smith, his sister, Dorothy S. Smedley, and step son, John P. Hardy.

He is survived by his son, Scott A. Smith, his step daughter, Martha E. Hardy, and step son, Henry E. Hardy as well as nephews Ronald Smedley and William Flaherty, and niece, Dorothy Smedley.

In lieu of flowers, the family prefers that those who wish may make contributions in his name to Friends of the National WWII Memorial, ( www.WWIImemorialfriends.org ), 921 Pennsylvania Avenue, SE, Suite 316, Washington, DC 20003 or to Church of the Covenant, 11205 Euclid Avenue, Cleveland, OH 44106 where Memorial Services will be held on Monday, July 17 at 11 AM in the Chapel.