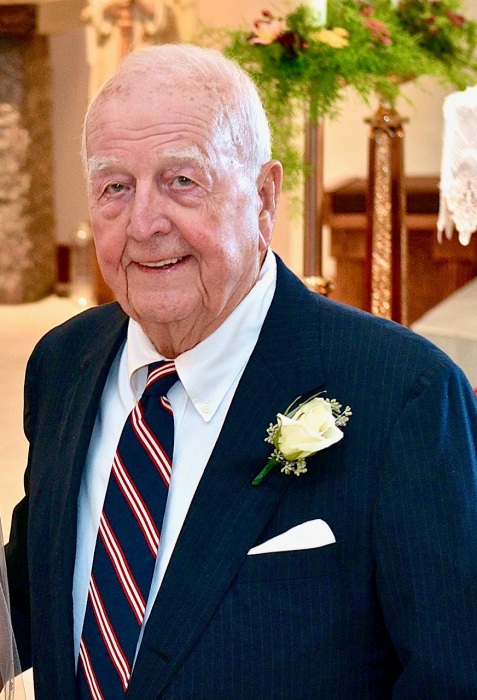 Robert D. "Chub' Russell was born August 19, 1923 in Lebanon, Ohio to parents Veda and Virgil Russell.  He graduated from Lebanon High School in 1941 where he was an all-state center for the basketball team, and quarterback for the football team.  He was awarded an athletic scholarship to Miami University where he played both sports.  Chub revolutionized the forward pass in football, and was drafted by The Cleveland Browns.  During summer practice he suffered a career-ending knee injury.  In later years and with great humor, he referred to himself as "an almost has-been".  One of Chub's most cherished life's moments was when he was inducted into the Miami University Athletic Hall of Fame in October, 2016- a long awaited and well-deserved honor.

Chub's education was interrupted by World War II.  He enlisted in the United States Navy V-12 program and entered the U.S. Naval Reserve Mid-Shipman School in Chicago.  He was sent to Miami Florida for Sub-Chaser Training School, then on to Panama where he served as Lieutenant, JG.  He was proud of his service and especially proud of his brother, Charles, who lost his life while serving.  Chub was instrumental in honoring his brother with a  funeral with full military honors at Arlington National Cemetery.

Upon returning to Miami University, Chub met his sweetheart, Martha (Marty) Dawley. After graduation they married in January 1949 and became an official Miami Merger. They raised two daughters, Nancy Knights and Susan Kollman (Scott).  The family grew to five grandchildren and seven great-grandchildren.  Family meant everything to Chub and Marty- not only their immediate family but with all their nieces and nephews and brothers and sisters. Those close family bonds remain today with all.  Chub lost the love of his life in December 2018, after nearly 70 years together.

Chub worked his entire career in sales at Pickands Mather & Company from 1948-1985.  His work took his family to Chicago, Cleveland, New York City, then back to Cleveland.  He moved his family to Hudson, Ohio in 1972, where he and Marty remained.  They worshipped at Christ Church Episcopal and were longtime members of the Country Club of Hudson where they enjoyed socializing with friends and playing golf together.  Chub once again displayed his athletic prowess when he won the Seniors Golf Championship at CCH. Music played a very important part of Chub and Marty's life together.  They were well-known for their parties with all the guests participating in singing, and a friend's birthday never went by without a singing parody written for that friend. They often met with friends at local pubs to listen to live music.

Chub will be remembered as loving his family, his Alma Mater, and his country as a World War II Veteran.  In his own words:

"I have enjoyed my life and would like to be remembered as a good guy".

The family prefers that those who wish may make contributions in his name to the Miami University Athletic Fund, 725 E. Chestnut St., Oxford, Ohio 45056 (miamiathleticfund.org) or to Hospice of the Western Reserve, P.O. Box 72101, Cleveland, OH 44192.

To order memorial trees or send flowers to the family in memory of Robert Russell, please visit our flower store.