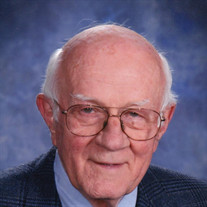 Robert Donald (Bob) Neary, age 83, former Co-Chairman of the international accounting firm Ernst & Young, died peacefully on June 11, 2017 after a 3 ½ month bout with cancer. He leaves his wife of 63 years, Janet, as well as four children, their spouses, and 12 grandchildren: Bruce and Jayme Neary of Minnetonka, MN, (Michelle, and her wife Leslie, and Joe); Doug and Denise Neary of Shaker Heights, OH, (Michael, David, Matthew and Jennifer); Martha Neary and Naim Peress of Lebanon, NH, (Jacob and Isabel); and Brian and Alisa Neary of Arlington, VA, (Alexander, Aubrey, Nicholas and Sebastian). He also leaves his sister Janet Neary, brother David (Roxanne) Neary; brothers-in-law and sisters-in law Donna and Gene Hartwig and Roger and Vi Netzer and numerous nieces and nephews--a wonderful close extended family that shared many happy gatherings. Raised in Des Moines by loving parents, Bob was taught traditional values of sharing, looking out for others, and working toward the common good. Bob lived with zest and humor, and with gratitude for the many blessings life gave him.

He started his successful career at the accounting firm of Ernst & Ernst in Detroit in 1954, quickly making partner. He then moved to Washington, DC where he took on an expanded role as a regional director and became the firm's national liaison with the S.E.C., before being promoted to the Cleveland headquarters in 1975. He became Co-Chairman of then-Ernst & Whinney in 1984 and was part of the leadership team that negotiated and implemented the merger with Arthur Young in 1989. Bob retired from Ernst & Young (now EY) in 1993. Many of the young people he mentored during his lengthy career have become leaders of EY. He viewed the opportunity to work in a profession based on integrity and honesty, with his "family" of smart, ethical colleagues, as a lifelong blessing. Bob was proud to lead a number of professional committees tasked with ensuring and maintaining the highest standards of accounting practices.

After he retired, he served on a number of business Boards, including Commercial Metals, Inc., Zurn Industries Inc., Cold Metal Products, and chaired the local Armada/Allegiant/PNC Funds.
Another of his blessings was his deep connection to the University of Michigan which began in 1950. It was there he met Janet, was elected Student Legislature President, and quickly became a fan of Michigan football and all things Maize and Blue. His contributions and fundraising for the University continue to support their innovative academics and interdisciplinary approach to education. Bob loved Cleveland-- not only for its many attractions and sports teams, but also for its tradition of service and philanthropy. Despite his busy travel schedule, he made time to lead the original "Ten Plus" section of United Way, chaired the D.A.R.E. program, and the Board of Great Lakes Theatre Festival and was an Emeritus Salvation Army Board member. Bob often expressed the hope that people would honor his memory by doing a good deed for someone who wasn't as lucky as he.

He was a member of the Union Club, the Country Club, the Pepper Pike Club, the Tavern Club, the Hole-in-the-Wall Golf Club and was a chair of The 50 Club. Bob will be remembered for his generous spirit, but most likely for his wit and sense of humor. He was an irrepressible story-teller who enlivened many a meeting with his irreverent comments. He truly broke the mold of the dull accountant, and many of his friends and colleagues count this as one of his greatest attributes. The family wishes to thank the Seidman Cancer Center of University Hospitals, and the Ames Hospice House of the Hospice of the Western Reserve for their unfailing compassion care and support, delivered in tranquil surroundings.

A SERVICE CELEBRATING HIS LIFE WILL BE HELD IN PLYMOUTH CHURCH, 2860 COVENTRY RD., SHAKER HTS., OH AT 11 AM ON JUNE 24th, IMMEDIATELY FOLLOWED BY A RECEPTION AT THE COUNTRY CLUB, 2825 LANDER RD., PEPPER PIKE, OH, 44124. THE NEARY FAMILY WILL RECEIVE FRIENDS AT BROWN-FORWARD, 17022 CHAGRIN BLVD., SHAKER HTS., OH ON FRIDAY, JUNE 23rd FROM 4:30 TO 7:30 PM.
To order memorial trees or send flowers to the family in memory of Robert Neary, please visit our flower store.