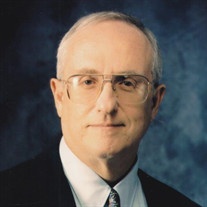 Robert Frederick Meyerson passed away on Saturday, April 7, 2018. Inventor, entreprenuer, philanthropist, Bob made a difference to so many lives through the businesses that he built, the people he mentored and causes he supported throughout his life. The consummate salesman, Bob spent his life, cigar in hand, building teams, perfecting his products and reaching out to customers around the world.

Born July 29, 1936 in Cleveland, Ohio to Sanford and Rae Meyerson, "Bullet Bob" graduated from University School in Shaker Heights with his "band of brothers" who remained close all their lives. After attending Dartmouth College where he was a member of the original "Animal House" Fraternity Alpha Delta, Bob returned to Cleveland where he founded MMG Advertising with Richard Gurda and US buddy John Murray. In 1959, Bob convinced the gorgeous and extraordinary Nancy Hood to marry him and together they raised six children and spent the next 47 years navigating the adventures they created.

An entrepreneur to his soul, Bob went on to create a succession of businesses including Systems Marketing Corporation and Basicomputer, which he co-founded with his son Peter Selden. He is best known as Chairman and CEO of Telxon Corporation which at one time was the world leader in the design, manufacture and marketing of portable and wireless teletransaction computers and systems. During his 25 years of service at Telxon, "Captain Chaos" drove the evolution of new technologies in wireless networking, pen-based computing and image processing; leading to strategic investments in Aironet, Itronix and Metanetics. Always hands-on, Meyerson jointly holds 13 technology patents along with his teams of dedicated engineers. In 1986, Meyerson was co-recipient of the HBS of Cleveland Dively Entrepreneurship Award.

Helping others and giving back to society were values Bob lived by his entire life. Both Bob and Nancy were avid supporters of education, arts and culture. Through the Hood/Meyerson Foundation they established the Hartley H. Hood scholarship at Dartmouth College for rural students in memory of Nancy's father, the Arroyo Scholarship at Akron University for minority students in engineering, the Reverend John McDonough Scholarship at John Carroll University and various endowments and building fund contributions to University School. They also endowed the Hood/Meyerson Lectureship on Free Enterprise at Akron University which has welcomed distinguished speakers including Henry Kissinger, Jeane Kirkpatrick, Malcolm Gladwell and Charles Krauthammer.

Among the many boards he served, Bob was an Honorary Trustee for Life for the Cleveland Orchestra, a Life Trustee for University School, Trustee for The Cleveland Clinic as well as a member of the Medallion Society and served on the Board of the Akron Art Museum.

Beloved husband of the late Nancy (Hood). Deeply loved father of Peter (Debra) Selden, Andrew (Roseann), Elizabeth "Gigi" (Roger) Murphy, Matthew (Lori), Adam (Cindy) and is predeceased by his beloved son David. Bob delighted in his many grandchildren Daphne, Michael, Emily, Katie, Zachary, Danny, Nicholas, Courtney, Blake, Logan, Reid, Lisa, Andrea, Robert, Will, Matt and Robert and his 12 great-grandchildren. Much adored by his two sisters Beverlee Rosenbluth and the late Maxeen Stone Flower as well as many nieces and nephews. Bob is survived by his loving companion of many years, Debbie Warren.

In lieu of flowers, memorial contributions may be made to the Alzheimers Association.
A Memorial Service will be held at Fairmount Presbyterian Church, 2757 Fairmount Blvd., Cleveland Hts., OH 44118 on Saturday, April 28 at 3:00 PM. The family will receive friends immediately following the service at church.