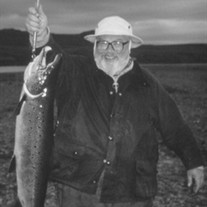 With Bob's Passing Cleveland has lost one of it's consummate gentlemen. A perfect man for his times. He is described by family and friends as ingenious, persistent, cantankerous, playful, assertive, curious and spontaneous. He moved seamlessly in the amply textured society he was born into.

In business he is noted for heading the R.E. Mathews Insurance Agency throughout his career. As an entrepreneur he will be remembered as one of the primary investors in Filmco a Cleveland company that pioneered the product that would later become Reynolds Plastic Wrap. Although, an acute businessman. Bob will be acknowledged primarily for his contributions to environmental and humanitarian pursuits. First as a long standing board member at the Cleveland Museum of Natural History. As well as, distinguished member of the Rowfant Club.

A conscientious sportsman that built a legacy of habitat and wildlife conservation. Through the Winous Point Marsh, a major supporter of wetland research and educational programs. Spending a day out with Bob was memorable. Just sharing a cigar, a scotch and reminiscing a fine wood rod, impeccable shotgun or first edition book would be engrained in one's memory.

A connoisseur of fine craftsmanship: Bob collected with intensity and always shared his passion with others. His parties were legendary! We have lost a great outdoorsman, husband, father and friend. He will be sorely missed yet lives on a little in each of us. Services are private.

In honor of Mr. Mathews, the family suggests that donations be directed to The Cleveland Museum of Natural History.