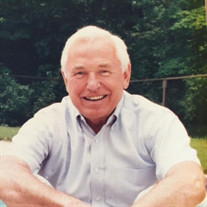 Robert L. Larson (Bob to all) passed away on September 29th at Judson Park, of complications associated with a stroke.

Born May 4, 1929 in Rockford, Illinois, he graduated from the University of Illinois (Phi Beta Kappa), served as a Captain in the US Marine Corps in combat in Korea, and graduated from Harvard Law School in 1956.

He was a member of the management committee at Thompson Hine, where he practiced labor law for over 40 years. In that role, he represented the City of Cleveland, the Musical Arts Association (Cleveland Orchestra), the Cuyahoga Board of Developmental Disabilities, and numerous other public and private organizations.

While Bob shunned the limelight, he believed strongly in public service and education, and possessed a generous nature. He used his considerable legal skills, intellect, common sense (and sense of humor!) to help organizations and individuals alike.

A long-time resident of Pepper Ridge Road in Pepper Pike, he served two elected terms on the Orange Board of Education. He was a long time, popular member of the Cleveland Racquet Club, a Judge of the Court of Nisi Prius, and he served as Senior Warden of St. Paul's Episcopal Church in Cleveland Heights.

In lieu of flowers, please consider a memorial contribution to The Musical Arts Association ( https://www.clevelandorchestra.com/support-and-volunteers/donate-now /) or the Legal Aid Society of Cleveland ( https://lasclev.org/donate/ways-to-give /).


To order memorial trees or send flowers to the family in memory of Robert Larson, please visit our flower store.