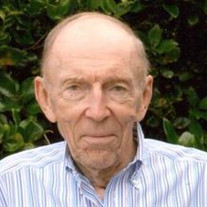 The son of Pat and Helen Gunton, Bob grew up on the East Side of Cleveland and graduated from Cleveland Heights High School and Dyke College. In 1941 he enlisted in the Army Air Corps. He flew 33 combat missions over Europe as the Captain of a B-24 Liberator, 10 of these missions as lead pilot.

After completing his tour of duty in Europe, Bob was stationed at Mountain Home Air Force Base outside of Boise, Idaho. It was at an Officers' Club dance that Bob asked his date to introduce him to her friend, Beth Jacobs. When later questioned why he had asked his date to make the introduction, Bob said, "Because she was the prettiest girl at the dance." This introduction lead to a 70-year partnership that brought Bob and Beth back to Cleveland.

Bob's love of flying continued long after his service years. He was an accomplished private pilot, and throughout the next decades, Bob would spend much of his free time in the air. He went on to found Sky Quest LLC, an aircraft charter and management company headquartered at Cleveland Hopkins Airport.

For 50 years Bob was Co-President of Gunton Corporation, a distributor of Pella Windows and Doors. Together with his brother Bill, Bob pioneered the development of many innovations which are now common practice in the fenestration industry. After stepping down as Co-President at Gunton, Bob remained an active board member for 20 years.

Above all else, Bob loved his hometown and spending time with family and friends. He was proud of his city and was always the first in a crowd to highlight what a wonderful place Cleveland was to live and raise a family. When not in Cleveland, Bob and Beth spent time in Sun Valley, Idaho and Vero Beach, Florida. He loved a good party, especially if there was Big Band music and dancing. Always physically active, Bob was an avid tennis player, swimmer, and golfer. He also enjoyed playing bridge with friends at the Chagrin Valley Hunt Club.

Known as Pop, Wheatie, and Grampy, Bob was always easy-going and game for anything his five grandsons could conjure up. He was good natured, thoughtful, humble, fair-minded, and intellectually inquisitive. Bob always had a supportive comment or kind word and often shared his wisdom with his children and grandchildren. A true gentleman and role model, he leaves a legacy that will live in the hearts of his children and grandchildren for the rest of their lives.

The family prefers that those who wish may make contributions in his name to the Hospice of the Western Reserve, 300 E. 185th St., Cleveland, OH 44119 or to University Hospitals of Cleveland.