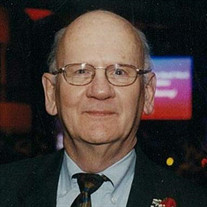 Robert Carl Grunwald was born April 1, 1932 in Cleveland to Carl Louis and Tillie (Haase) Grunwald. He passed away peacefully May 17, 2018 with family by his side. Bob was raised in Cleveland by his parents, aunts and uncles with his sister Norma and numerous cousins.

Bob graduated from Shaw High School in 1950. After attending Kent State, he served in Korea in the US Army. In 1955, he joined Sherwin-Williams, in a move that would profoundly affect the rest of his life.

Bob met the love of his life, Doris Warren Grunwald, at Sherwin-Williams. They were married in 1957 and celebrated their 55th wedding anniversary in October 2012, shortly before Doris's death. When they married, they moved to an apartment in East Cleveland, then to Lyndhurst as their daughters Gretchen, Gail and Janet, were born.

Bob continued his career at Sherwin-Williams in various positions in the transportation areas until his retirement at age 83 in 2015, becoming the longest tenured employee of the company. He seemed to know everyone in the trucking and railroad businesses, and everyone who knew him had great respect and affection for him.

With those professional accomplishments, his greatest pride was reserved for his family. Everyone who knew him in business knew that he opened every event with an update on his daughters, their husbands and children. He and Doris vacationed every summer with some or all of their daughters, sons-in-law and grandchildren, creating beautiful and lasting memories for all.

Sports played an important part in the family's life as well. Bob and Doris had hockey season tickets for the Cleveland Barons, and Bob had Cleveland Browns season tickets for 50+ years. The family frequently attended Indians and Cavaliers games, and each of the Grunwald girls continue to follow sports with their own families.

A service of remembrance and reception will be held Saturday June 2, 2018 at 12:00 at Mayfield Country Club, 1545 Sheridan Road, South Euclid, Ohio 44121. The service will include time for all to share their favorite memories and anecdotes, so prepare your favorite Bob stories!

In lieu of flowers, the family requests donations be made in his name to Bob's long time favorite charity, the USO, at www.uso.org .


To order memorial trees or send flowers to the family in memory of Robert Grunwald, please visit our flower store.