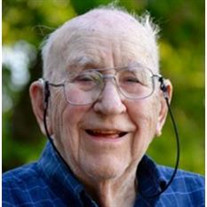 Robert Erb Gregory, M.D.,97, passed away peacefully in his sleep on the evening of December 13th, 2017 in Cleveland, OH. He was born on December 31, 1919 in Pittsburgh, Pennsylvania to Floyd and Nellie Gregory. On August 30,1945, he married Jean Shirley Lindberg (died June 29, 2004), and together they raised three children, Kristine G. Hawkins, Robert E. Gregory Jr., and Karen G. Mullen.

Dr. Gregory worked as a surgeon for 43 years. He attended Mount Lebanon High School and graduated from the University of Pittsburgh with a Bachelor's of Science and Doctor of Medicine degree in 1943. He interned at South Side Hospital in Pittsburgh, and served his residency in Pathology and General Surgery at the University of Pittsburgh. From 1944 to 1946, he served as a Captain in the Army of the United States, Medical Corps, 66th Battalion, 12th Armored Division. He received a Purple Heart, and a Bronze Star.

Upon returning from the war, he worked as a general surgeon in a private practice at South Side Hospital, Pittsburgh and Saint Clair Hospital, Mount Lebanon. He volunteered as a surgeon for Lutheran World Ministries in Bumbuli, Tanzania, and Finschafen, Papua New Guinea. He retired in 1985 to Scottsdale, Arizona. He spent his summers at Lake of the Woods in Baudette, Minnesota.

He is survived by his three children, eight grandchildren, and eight great-grandchildren. His family remembers fondly his boundless energy, his strong work ethic, and his endless devotion to his wife and family. A service will be held Saturday, January 6, 2018 at 11:00am at Mount Lebanon United Lutheran Church, 975 Washington Road, Mount Lebanon, PA 15228. In lieu of flowers, donations can be made to the Cleveland Clinic in Cleveland, OH. ( https://giving.clevelandclinic.org ).

To order memorial trees or send flowers to the family in memory of Robert Gregory, please visit our flower store.